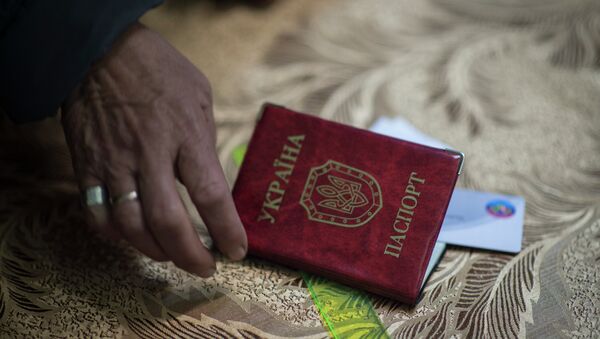 Game Over: Ukraine on Brink of Economic Collapse
Ukrainian news hub Vesti has discovered that dozens of ads have begun appearing on Ukrainian classified sites such as olx.ua, featuring ads like: "Leaving the country. Will sell my Ukrainian [internal] passport. The passport is clean. No loans against it. Checked against all databases. Will sell for cheap."

Contacting the seller above while posing as a potential buyer, a journalist from Vesti discovered that the man was moving to Germany, and that he no longer felt the need to hang on to his internal passport. "I will sell the passport from $1,000 US; if you need the [tax] identifier that will be another $500. I don't care what you're buying it for. In any case I can always say that I lost it and decided not to report it to the police because I no longer need it," the man, identified only as Sergei, said.

Another man contacted by the Ukrainian news site was also willing to throw in his birth certificate and diploma. "$2,200 for everything. I don't need these things anymore, and I need the money," the man noted.

Ukrainian legal experts have warned that the passports will be used mainly for criminal purposes, noting that according to Ukraine's criminal code, forged and faked documents carry with them a sentence of up to three years behind bars.

Human rights activist Eduard Bagirov noted that the passports may come in handy for politicians and businessmen looking to escape the country. "Actually, the range of people who might be interested in such a thing is very large, from people who register [fake] one-day firms through which they make cash withdrawals, to those who sell stolen goods to pawnshops, to large-scale scammers, and even murderers."

Ultimately, Bagirov warned that "if the buyer commits a crime with your passport, and he will, because otherwise he has no reason to buy it, you may be held liable as an accomplice to the crime." So far, such threats have not stopped dozens of desperate Ukrainian would-be immigrants from offering their documents for sale.

As Ukraine's Debt Approaches GDP, Is Default Inevitable?
Over the past year-and-a-half, Ukrainians have seen a dramatic decline in their standards of living as a result of a deep political and economic crisis, which have reverberated across every sphere of life. Wages and pensions in the country have been frozen, while prices for basic goods, including food and utilities, have skyrocketed. Earlier this year, embattled Prime Minister Arseniy Yatsenyuk stated that the country's challenge for 2015 will be to "survive," with "absolutely everyone" to feel the pinch of the economic crisis.
Newsfeed
0
Access to the chat has been blocked for violating the rules . You will be able to participate again through:∞. If you do not agree with the blocking, please use the feedback form
The discussion is closed. You can participate in the discussion within 24 hours after the publication of the article.
To participate in the discussion
log in or register
loader
Chats
Заголовок открываемого материала