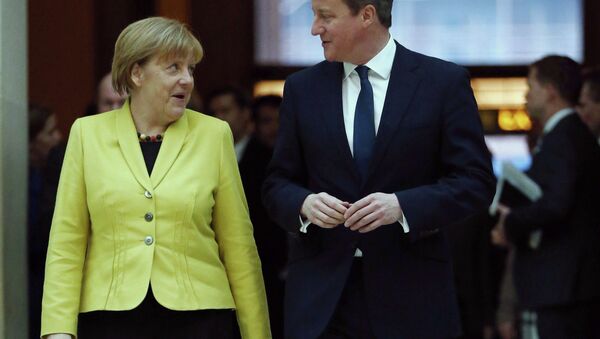 UK Prime Minister David Cameron meets Germany's Angela Merkel on Friday for crucial talks over Britain's membership of the European Union. Both leaders know they will have to make compromises, but history is on their side.

When David Cameron shakes Angela Merkel by the hand, he would do well to recall the reign of Queen Victoria as he begins discussions over Britain's continued membership of the EU. Victoria was the last of the House of Hanover, which ruled over the Duchy of Brunswick-Lüneburg, the Kingdom of Hanover and the United Kingdom of Great Britain and Ireland.

It was a halcyon era, where the royal families of both countries were intermarried. Victoria herself was married to Prince Albert of Saxe-Coburg and Gotha. Prior to the unification of Germany in 1871, both Britain and Prussia — which included major parts of present day Germany — were allies in many wars.

Much earlier even, in the Middle Ages when the Hanseatic League was formed, the two blocs traded with each other in an arrangement not unlike the present day EU. Despite two world wars in which the two nations were pitted against each other, the UK and Germany were founding partners in NATO and have been strong trading partners for decades.

.@JoyceAnelay Our priority is to reform EU, renegotiate UK's relationship with it & have in/out #referendum by end 2017 #QueensSpeech debate

In fact, the UK is Germany's third biggest trading partner, after France and the US, with a total trading value of $92 billion a year.

With such close historical ties, Cameron is having to perform a delicate political pirouette in remaining close allies with Germany, while at the same time keeping the EU machine at arms' length.

Cameron's dilemma is that he has to keep Tory Eurosceptics onside, promising them widespread reforms of the UK's membership of the EU, if they are to agree to remain a member. He needs to win enough opt-outs or treaty changes to distance the UK from an "ever closer union" and establish a bigger role for Westminster to block proposed EU legislation, if he is to keep his Eurosceptics happy. Public opinion in the UK is generally anti-Brussels bureaucracy and most people feel totally out-of-touch with the institutions of the EU.

For most people in the UK, the essential issue is workers from EU countries going to the UK and immediately claiming benefits — so-called "benefits tourism". To stop this, Cameron is seeking a four-year bar on benefits being claimed by migrants from the rest of the EU.

Today David Cameron is expected to tell Angela Merkel that if she doesn't back his EU reforms she'll let the SNP in.

Cameron's relationship with Merkel is crucial. She desperately needs to keep the UK within the EU. The UK is the fourth biggest contributor to the European Union, after Germany, France and Italy.

In a sign of the importance of the relationship between Germany and the UK,, The Queen and The Duke of Edinburgh, will make a State Visit to the Federal Republic of Germany in June and will be ceremonially welcomed with military honors at Bellevue Palace, the official residence of President Gauck. They will then travel by boat along the River Spree, to the Chancellery, where The Queen will meet Chancellor Angela Merkel.

When Queen Victoria's descendant shakes Merkel's hand, it will symbolize a relationship that goes back centuries and will do much to concentrate minds on the importance of staying together.