Switzerland May be Venue for FIFA Corruption Case's Legal Proceedings 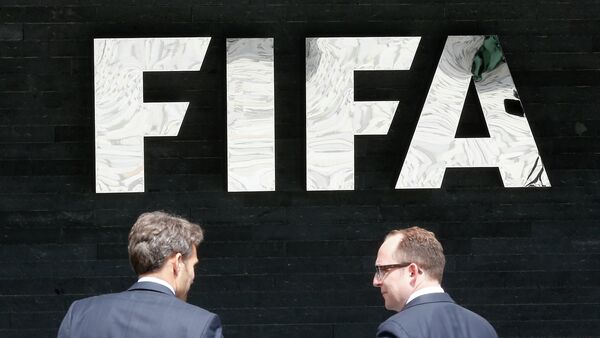 © AP Photo / Michael Probst
Subscribe
Switzerland can make a good case for the proceedings since FIFA is based in the country, Bruce Zagaris told Sputnik.

WASHINGTON (Sputnik) — Switzerland may become the venue for legal proceedings in the FIFA corruption case despite US calls to extradite indicted officials, lawyers told Sputnik on Thursday.

“The Swiss can make a good case for the proceedings since FIFA is based in Switzerland and many of the meetings and other activities occurred there,” Washington Attorney with Berliner Corcoran & Rowe and a member of American Society of International Law Bruce Zagaris told Sputnik on Thursday.

FIFA Needs Greater Transparency to Solve ‘Governance Problem’
On Wednesday, seven high-ranking FIFA officials were arrested in Zurich, where the organization is based, on US federal corruption charges involving $150 million. Following the arrests, US Attorney General Loretta Lynch said Washington would seek extradition of all those indicted.

However, UK Sports Law Barrister Samuel Okoronkwo, who specializes in professional soccer, said the accused might have a legal basis to have the proceedings in Switzerland.

“While the US [government] will prefer all prosecutions to take place in the United States, the accused may well have a legal basis for arguing otherwise, but this will depend on the facts of the charges,” Okoronkwo said.

Okoronkwo noted that the Swiss authorities appear to be involved in the FIFA case, and after making the FIFA arrests on behalf of the United States, they commenced an entirely separate investigation of FIFA on their own accord.

FIFA is the international governing body of association football, or soccer, responsible for the organization of major international tournaments, including the World Cup. It currently comprises 209 national teams.

Zagaris stressed Washington had a legal basis for its investigation into FIFA as some of the acts involved in the alleged bribery, money laundering and racketeering, occurred in the United States.

The attorney then noted that the US mail and wires were used and meetings occurred in the country. “The US financial system was used to make, pay and invest some of the bribes. In addition, US reporting and money laundering laws were involved insofar as the money went through the US,” he said.

Zagaris claimed that US failure to become the venue for the 2011 World Cup could also be a factor.

“The US participated in the bid for the 2022 games and hence, insofar as there were bribes for those games, the US was affected,” he said.

Zagaris said that for any country to conduct such an investigation, it should have a connection to the wrongdoing.

“A country must have a connection with the misconduct. Clearly the Swiss authorities are investigating,” he said. “Several other jurisdictions would conceivably have jurisdiction due to the length and scope of the alleged misconduct.”

Okoronkwo also noted the alleged crimes should fall within the jurisdictional boundaries of the investigating country.

“It has to be appreciated that the fact that an entity is international in nature does not offer it immunity from prosecution,” he said. “An entity like FIFA is not a sovereign nation. Although it may have its own constitution, its officers are necessarily bound by the greater law of the land wherever they choose to operate.”

On Thursday, the 65th FIFA Congress opened in Zurich and will end on Friday. Only two nominees — current FIFA President Joseph “Sepp” Blatter from Switzerland who has held the post since 1998, and current FIFA Vice President for Asia, Prince Ali bin Hussein of Jordan — are running for the organization’s presidency.