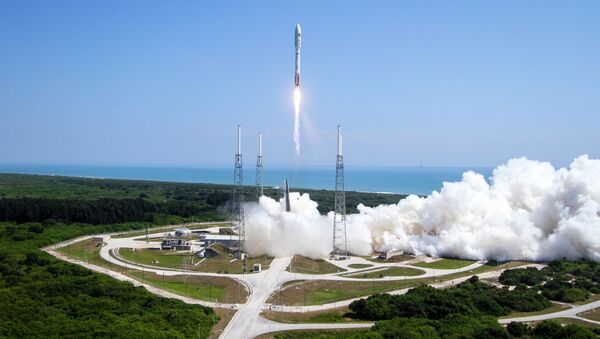 © AP Photo / United Launch Alliance via AP
Subscribe
International
India
Africa
Under the Spurring Private Aerospace Competitiveness and Entrepreneurship (SPACE) Act, which the US House of Representatives passed Thursday, firms involved in asteroid mining will be able to keep whatever they dig up.

"Any asteroid resources obtained in outer space are the property of the entity that obtained such resources, which shall be entitled to all property rights thereto, consistent with applicable provisions of Federal law," the SPACE Act reads, in part.

"This bill will encourage the private sector to launch rockets, take risks, and shoot for the heavens," said Lamar Smith, a Texas Republican who chairs the House Science, Space, and Technology Committee.

And while the section of the bill declaring "finders keepers" for asteroid miners may seem ridiculous or unnecessary, it addresses a dilemma that one day could arise as the commercial space industry gains momentum.

Brian Fung, of the Washington Post, writes: "… we don't want to wind up in a situation where multiple companies are fighting for the same patch of rock without having a way to resolve it. There are two key questions at stake: Who should regulate commercial space activity? And what rules should apply?"

The Federal Aviation Administration would become the de facto regulator, as it already grants licenses for commercial space launches that are not performed for NASA or the Pentagon.

And while the SPACE Act clarified property rights beyond earth, even lawmakers pointed out that the bill extends the FAA's jurisdiction over launches and reentries.

"The bill preserves the FAA's ability to regulate commercial human spaceflight in order to protect the uninvolved public, national security, public health and safety, safety of property, and foreign policy," the House Science Committee said in a release.

"It also preserves FAA’s ability to regulate spaceflight participant and crew safety as a result of an accident or unplanned event."

Now, the bill will move on for debate in the US Senate.