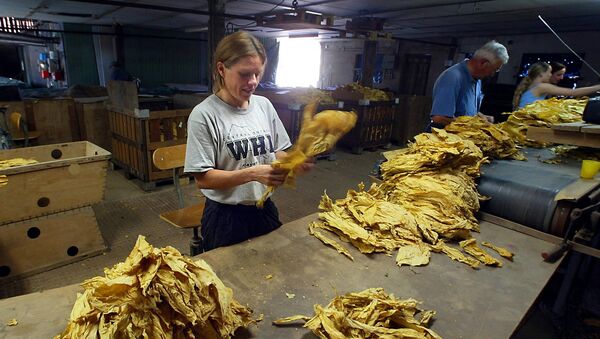 © AFP 2022 / OLIVIER MORIN
Subscribe
Deals drawn up a decade ago between the EU and four big tobacco giants are failing to crack down on cigarette smuggling according to journal - Tobacco Control.

Researchers, who have publishing their findings in the journal say the industry is "littered with loopholes, which tobacco companies can easily exploit…"

Tobacco and cigarette smuggling cost the European Union ten billion euros every year in lost tax revenues. The intention ten years ago was to put an end to the illegal trade in cigarettes across Europe by forcing the four big tobacco companies to secure their supply chain and stamp out any smuggling activity.

May 2015 issue out now. pic.twitter.com/Qkt8ct8Epd

The companies agreed to make the deal in return for dropping legal proceedings against them following evidence of direct and indirect involvement of the tobacco industry in smuggling activities.

In order for the European Commission and EU member states to recoup any lost tax revenue, the companies agreed to make two types of payments comprising of a yearly fixed amount ranging from $200 million to $1 billion; and seizure payments for hauls above 50,000 cigarettes.

In 2012, Philip Morris International, Japan Tobacco International, British American Tobacco and Imperial Tobacco Limited paid $4.5 million — the equivalent to 20 million seized cigarettes. But this according to the journal, Tobacco Control, is a tiny fraction — just 0.5 percent of the 3.8 billion cigarettes seized in the EU the same year.

Academic research carried out for the Association of European Cancer League found that Poland had the highest amount of smuggled cigarettes of all European Union countries with around 5,200 cigarettes seized in 2011. This means that the threshold of 50,000 cigarettes needed to recover taxes and duties has become increasingly difficult to meet.

Consignments of cigarettes and tobacco smuggled into countries are increasingly becoming smaller and "seizure payments are paltry and a wholly inadequate deterrent to Transnational Tobacco Companies' involvement in illicit trade," say the authors.

The authors conclude that the deals made by the tobacco giants "have served only to further industry interests and threaten progress in tobacco control… The agreements contain too many loopholes" and suggest that the companies are failing to secure their supply chains.

The agreement with Philip Morris International is currently being renegotiated. Meanwhile, according to the researchers: "Our evidence suggests the EU should not extend its agreement…and, if legally possible, should end the agreements with the other three tobacco companies."