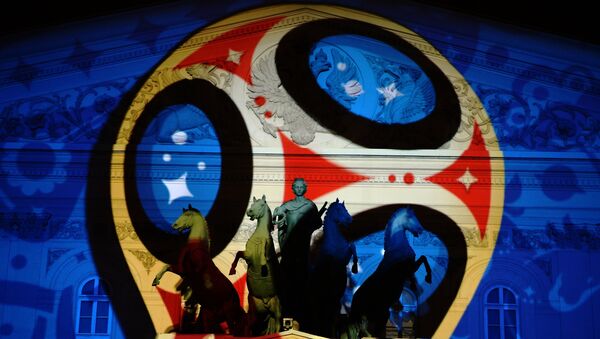 © Sputnik / Alexander Vilf
/
Go to the photo bank
Subscribe
US charges against FIFA officials are not related to Russia's bid to host 2018 World Cup, a former FIFA vice-president told Sputnik on Thursday.

The Unites States accuses the officials of federal corruption charges, including fraud, racketeering and money laundering in shady marketing. According to the US Justice Department, the suspects received some $150 million in bribes. They may now face extradition to the United States.

"It has nothing to do with our [Russia's] bid to host the World Cup in Russia, because they are arrested on corruption charges related to US internal events, such as the US Cup and those who have rights to host it," Vyacheslav Koloskov, who is the honorary president of the Russian Football Union said.

He added that "no one can doubt that the World Cup 2018 will be held in Russia," and "no one is able to reverse the decision of the FIFA Executive Committee."

In 2010, Russia was chosen to host the 2018 world football tournament.

The FIFA Congress will reject the UEFA general secretary’s call to postpone the world football association's presidential election amid corruption scandal, Vyacheslav Koloskov said. He also pointed out that the scandal with FIFA would not have an impact on the election and expressed confidence that the incumbent President Sepp Blatter would win in the first round.