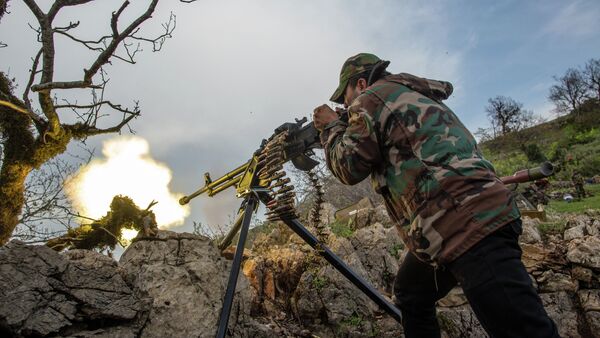 © Sputnik / Andrey Stenin
/
Go to the photo bank
Subscribe
The United States might discuss Iran's participation in the Syrian reconciliation after the nuclear deal has been finalized.

Sweet, Yet Forbidden Fruit: Investors Poised to Pour Billions Into Iran
The West has long accused Iran of trying to develop nuclear weapons under the guise of its civilian nuclear energy program, and introduced several rounds of sanctions against it.

In April, Iran and a group of international negotiators including representatives of Russia and the United States reached a framework for a deal to gradually lift the sanctions and guarantee the peaceful nature of Tehran’s nuclear energy program. The final deal has to be reached before July.

Since the beginning of the civil war in Syria, Iran, unlike numerous Western countries including the United States, has shown support for the Syrian government.

Russia Ready to Host Third Round of Intra-Syria Talks

Moscow is willing to host the third round of intra-Syrian talks, with many participants desiring to continue negotiations in this format, Russian Deputy Foreign Minister Gennady Gatilov said Thursday.

"Russia is ready to conduct the third intra-Syrian meeting in Moscow, many Syrian participants agree with this format and express their desire to continue it," Gatilov told RIA Novosti.

US Needs to Support Assad to Combat Islamic State
On Wednesday, Syrian Ambassador to Russia Riyad Haddad told RIA Novosti that Damascus was calling for a new round of talks in Moscow on resolving the Syrian crisis as soon as possible.

Syria has been mired in civil war for four years, with the government struggling against several insurgent groups, including the Islamic State and the Nusra Front.

Two rounds of negotiations have been held between the government and the moderate opposition. The sides agreed on an agenda, defining a negotiating framework for future talks on settling the crisis in the country, during April talks in Moscow.

Consultations behind closed doors on the Syrian issue are currently underway in Geneva, while Kazakhstan's Astana held negotiations between the opposition parties earlier this week.