US Trying to Block Reelection of Blatter as FIFA President - Putin 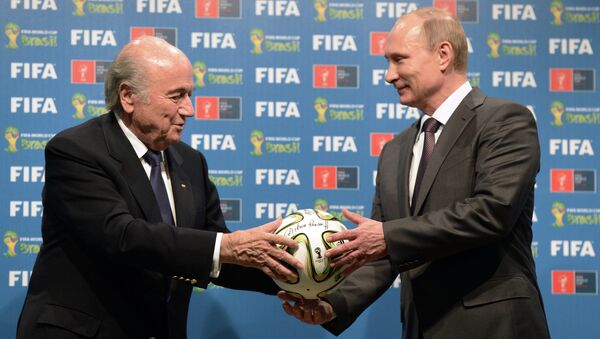 © Sputnik / Alexey Nikolsky
Subscribe
Several FIFA officials were arrested in Switzerland and could face extradition to the US on federal corruption charges.

MOSCOW (Sputnik) – The United States is attempting to stop the reelection of FIFA head Joseph Blatter as the president of the association which is a crude breach in the principles in the functioning of international organizations, Russian President Vladimir Putin told journalists Thursday.

“I don’t doubt a bit that this is a clear attempt to not allow the reelection of Mr. Blatter to the post of FIFA president, and this is a crude breach in the principles in the functioning of international organizations.”

The arrest of FIFA officials on the initiative of the United States is strange, Vladimir Putin said.

The football federation stated that Blatter was not involved in the corruption scandal.

FIFA Should Oust President for His Support of 'Putin Regime' - US Senators
Following the announcements, US Sen. Bob Menendez said that the indictment of FIFA officials shows that a new president is needed for the federation, adding that he has "long been concerned about FIFA’s selection of Russia" for the 2018 World Cup.

This is not the first time Menendez called on the FIFA congress to reconsider reelecting Blatter. Menendez and Sen. John McCain asked the football governing body in a statement Tuesday to elect a president who would strip Russia of 2018 World Cup.

On April 20, Blatter told Russian President Vladimir Putin that politicians who are dissatisfied with Russia hosting the World Cup can stay home.

The 65th FIFA Congress is scheduled to take place in Zurich on Thursday and Friday. Only two nominees – current FIFA president Blatter, employed in this position since 1998, and current FIFA Vice President for Asia, Prince Ali bin Hussein of Jordan – are running for the FIFA presidency.

The Ugly Game: Could FIFA Corruption Arrests Be Final Whistle for Blatter?
“In regard to the arrests, this looks very strange at the least because the arrests were carried out under the initiative of the American side on accusations of corruption,” Putin told journalists.

The 2018 FIFA World Cup in Russia will not be affected by the current corruption scandal engulfing football’s governing body, Vladimir Putin said.

“This does not concern us.”

The United States has made yet another clear attempt to spread its jurisdiction on other countries by initiating the arrests of FIFA officials in Switzerland, Vladimir Putin said.

On Wednesday, several FIFA officials were arrested in Zurich, Switzerland, and could face extradition to the US on federal corruption charges, including fraud, racketeering, money laundering, as well as corruption in marketing and broadcasting deals over the last 20 years.

Switzerland launched a separate probe into the bidding for the 2018 and 2022 world tournaments, to be hosted by Russia and Qatar respectively.

Russian Sports Minister Vitaly Mutko told R-Sport news agency on Thursday that he has not yet received an interrogation notice from Swiss authorities over the FIFA corruption scandal.