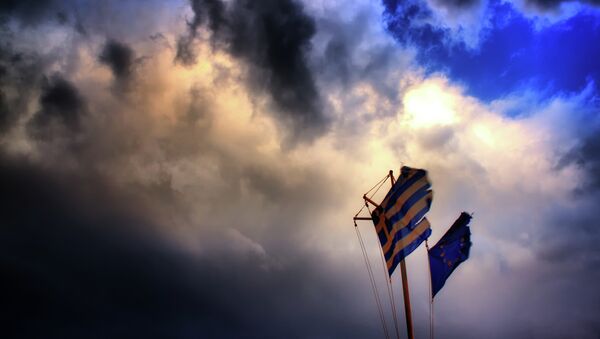 A Greek exit from the eurozone would be a disaster for everyone, which Athens is hoping to avoid, ruling Syriza Party's Deputy and Chairman of Committee on Economic Affairs Stefanos Samoilis told Sputnik Wednesday.

MOSCOW (Sputnik) — Samoilis echoed the statement of Finance Minister Yanis Varoufakis, who said on Sunday that if Greece leaves the single currency as a result of the crisis, it would be a "disaster for everyone involved."

"A potential Grexit is indeed a great disaster. Not only in terms of economics. This is something that no one is aiming at. Including Athens," Samoilis said.

G7: US to Bully Europe Over Greece Deal Amid Grexit Fears, Russian Links
Samoilis added that Greece is the "birthplace of democracy and many of the values that lie at the core of the European culture" and "an exit from the euro thus would mark a point in history which represents a big step back."

Greece is currently in a deep economic crisis, with its national debt standing at some $350 billion, or about 175 percent of gross domestic product.

In recent months, the European Union has discussed a so-called possible Grexit – Greece's withdrawal from the Eurozone due to the country's enormous debt. Such speculation was fueled further by the recent election win of the anti-austerity Syriza party.