The Ugly Game: Could FIFA Corruption Arrests Be Final Whistle for Blatter? 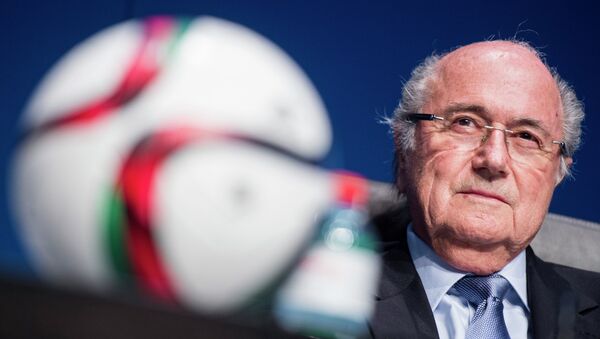 FIFA has been rocked by a fresh bombshell after seven of its officials were arrested over corruption allegations. Despite assertions that president Sepp Blatter wasn't involved in investigations, critics have suggested that the latest controversy could spell the end for the FIFA boss.

The latest arrests of seven current FIFA officials, carried out by Swiss investigators on behalf of US authorities, follows ongoing criticism of the nature in which the organization is run and comes just one day before FIFA's congress in Zurich, where a vote on who will lead football's world governing body is to take place on Friday.

The US Department of Justice said that senior football and corporate officials such as FIFA vice-president Jeffrey Webb were among those arrested for alleged racketeering, conspiracy and corruption, with reports that FIFA delegates or FIFA sub-organizations may have embezzled more than $100 million.

US attorney general Loretta Lynch said the arrests related to long-standing alleged "corruption that is rampant, systemic and deep-rooted both abroad and here in the United States" and that it "spans at least two generations of soccer officials who, as alleged, have abused their positions of trust to acquire millions of dollars in bribes and kickbacks."

If the day didn't start off bad enough for FIFA, Swiss officials have since opened up separate criminal proceedings over the awarding of the 2018 and 2022 World Cups to Russia and Qatar respectively.

The Swiss attorney general said authorities had seized electronic data from FIFA headquarters, while criminal proceedings had been initiated against individuals on "the suspicion of criminal mismanagement and of money laundering in connection with the allocation of the 2018 and 2022 football World Cups."

Central to the ongoing corruption claims over the years has been the divisive figure of FIFA president Sepp Blatter, who has been in football's top job since 1998.

Many have argued that the lack of transparency associated with the organization and allegations of shady, back-hand deals has had much to do with Blatter's control of FIFA and his preferred method of operation.

However, despite today's arrests and allegations of a culture of corruption, FIFA spokesperson Walter de Gregorio refuted claims of Blatter's knowledge of the current investigations, saying the Swiss is "not involved in them at all."

De Gregorio instead said that FIFA had initiated the investigation, claiming that:

"This for FIFA is good. It is not good in terms of image or reputation, but in terms of cleaning up, this is good… It is not a nice day, but it is also a good day. The process goes on and we are looking forward."

FIFA officials have insisted that the 2018 and 2022 events will go ahead in Russia and Qatar, however jitters were felt in Qatar's stock exchange, with stocks in Doha falling by 1.5 percent following the announcement of the arrests.

if @FIFAcom were a company listed on a stock exchange how would its share have performed with so much bad press in recent years? #FIFA

However, the argument put forward by FIFA that president Blatter has nothing to do with the recent developments has fallen on deaf ears, with many calling for his immediate resignation to allow the organization to rid itself of the image of corruption and start afresh.

"The warning signs for FIFA have been there for a long time. Fifa has refused to abide by many basic standards of good governance that would reduce the risk of corruption," Cobus de Swardt, managing director of NGO Transparency International said.

"These scandals have taken place under Sepp Blatter's watch, which spans almost two decades. For the sake of the fans, and good governance of football, it is time for him to step down. The elections for president are not credible if they are tainted with these allegations by the highest prosecuting authorities."

Will He Stay or Will He Go?

The arrests have also come at a crucial time for the future of FIFA, with a presidential election on who will head the organization to be held at the Zurich congress on Friday.

FIFA officials have said that the vote, which before today Blatter was expected to win, will go ahead regardless of today's bombshell.

However, English Football Association (FA) chairman Greg Dyke, who is an outspoken critic of Blatter said that today's developments were "very serious for Fifa and its current leadership," and has called for a delay in the presidential vote.

"There must be a question mark over whether the election should take place in these circumstances. Clearly things are changing very quickly and our delegation to the Fifa congress in Zurich, which I am leading, will discuss the position and what we should do about it with our colleagues in UEFA when we meet tomorrow morning."

Blatter's challenger in Friday's vote, Jordanian Prince Ali bin al-Hussein, ramped up his campaign by saying that today is "a sad day for football" while tweeting:

We cannot continue with the crisis in FIFA, a crisis that has been ongoing and is not just relevant to the events of today.

But, as is the criticism of FIFA and frustration within the self-regulated organization, many pundits believe Sepp Blatter will stay on as the federation's president for another term, despite today's explosive revelations.

John Delaney, chief executive of Ireland's football association, the FAI, said he believed the Swiss would remain on as FIFA president, because although widely unpopular in Europe, Blatter had secured the support of many smaller and developing countries in Africa, Asia and Oceania.

"In my opinion he will win the election if it takes place on Friday. Until this morning there wasn't really [a chance of Blatter losing]," he told TV station RTE.

"I think there was a sense among people like myself and the FAI were going to vote against Blatter because they felt he shouldn't continue and that was the right thing, but yet he would have the votes to win because he has those of the small countries. The events of this morning may change that and I'll only know that when I get to Zurich later today and when we attend the UEFA meeting in the morning [tomorrow]."