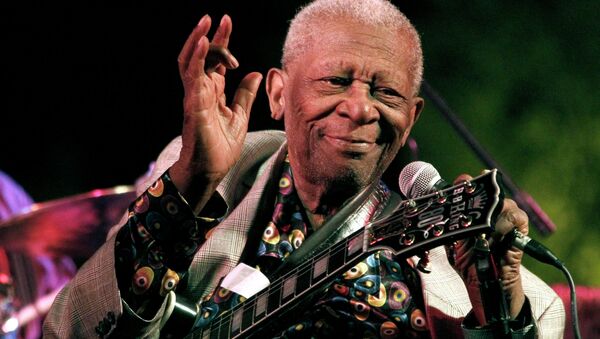 © AP Photo / Rogelio V. Solis, File
Subscribe
Two daughters of blues legend BB King, who died on May 14 while in hospice care in Nevada, filed affidavits over the weekend claiming their father was poisoned by two of his closest associates.

King, who was 89 when he died in his sleep, had battled diabetes for years, and the disease caused a series of small strokes that took his life, his doctor and a coroner said at the time of his death.

Lawyers for King's estate called the claims unfounded and disrespectful.

Nevada's Clark County Coroner said it would investigate with the Las Vegas Police Department's homicide division, adding that the investigation is expected to take at least six to eight weeks.

"At this point, we don't have evidence that these allegations of foul play will be substantiated," Coroner John Fudenberg told BBC News. "However, we are taking them very seriously and will be conducting a thorough investigation."

The Las Vegas Police Department, however, said it will not launch an investigation until it is determined King died of unnatural causes.

"Until such time as the Clark County Coroner determines Mr. King's death to be from other than natural causes, the Las Vegas Metropolitan Police Department is not moving forward with any investigation," the department said in a statement.

King's daughters added that "King was sequestered from all family members" in the week before his death, and that Toney and Johnson were the only people with him.

Toney, who is the executor of King's estate, shrugged off the daughters' claims.

"They've been making allegations all along. What's new?" she told the Associated Press.

A lawyer for King's estate also dismissed the accusations as "ridiculous."

"I hope they have a factual basis that they can demonstrate for their defamatory and libelous allegations," Brent Bryson said in a statement.

Earlier this year, Patty King, Karen Williams and a third daughter, Rita Washington, went to court accusing Toney of neglect, but the case was dismissed because of a lack of evidence.

Considered one of the world's greatest guitar players, King was inducted to both the Blues Foundation Hall of Fame and the Rock and Roll Hall of Fame. He was married twice and had 15 natural and adopted children, 11 of whom are still alive.

His funeral is scheduled to be held on Friday in Mississippi following public viewings that have attracted crowds of fans.