Romano Prodi: Isolation of Russia Does Nothing But Harm to EU 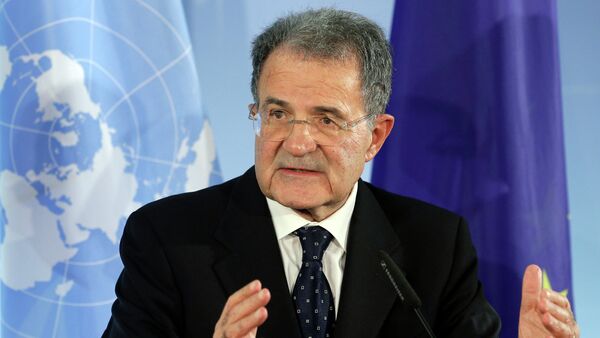 Ukraine's NATO Membership Should Be Off the Table - Brzezinski
"If you want Ukraine to be a European-friendly country and a bridge to Russia, not a member of NATO and the EU, you should pursue policies consistent with this goal. If the goal is to bring Ukraine into NATO, then you create irreversible tensions," he said.

Commenting on the latest developments in Europe, in particular, the situation in Greece and the results of the elections in Poland and Spain, Prodi said that "Europe no longer has any policies or ideas, it only has rules and arithmetic. But one cannot rule only with the help of arithmetic."

Prodi said that European Commission President Jean-Claude Juncker had unveiled an investment plan nine months ago, however, no progress had been achieved yet.

According to Prodi, one of the main challenges the EU is currently facing is that the "center of power has shifted from the [European] Commission to the countries, above all, to Germany." However, in his opinion, Germany alone cannot be responsible for the future of the European Union.

"There is no policy that is an alternative to Berlin's policy. We were the Union of minorities, but today, we have become a Europe of one course — the German. I have long hoped that France, Spain and Italy would work out a common line, but they could not do it," the politician said.