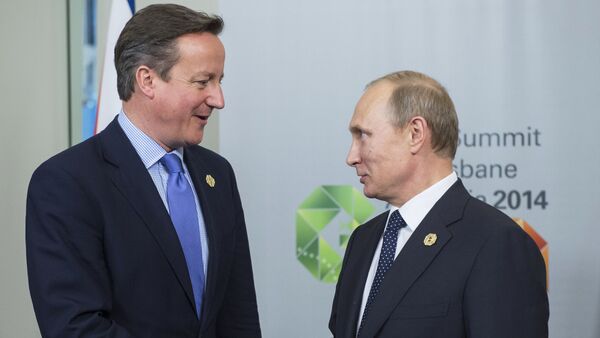 © Sputnik / Sergey Guneev
Subscribe
As Great Britain has now invited Russia to participate in the fight against terrorism, the West seems to have realized that confrontation with Russia has no good endings. However, both countries are organizing major military maneuvers to preserve the facade of the conflict and not to give the impression of weakness, DWN wrote.

The West has realized that Russia’s isolation is ineffective, especially when it became clear that America has not achieved any positive results in Syria, DWN reported.

Britain and Russia have announced their intention to cooperate closely to solve the Syrian crisis. Prime Minister David Cameron and Vladimir Putin have agreed to a meeting between senior security advisers of both countries, the newspaper reported, referring to a statement of the British government.

Gerhard Schröder: West Treats Russia in Wrong Way
The activities of the Islamic State and the Syrian civil war were the main topic of the half-hour phone call, the government’ s spokeswoman said.

However, according to the newspaper, both countries do not want to reveal the turnaround in their relations too quickly. Thus, they are conducting military maneuvers that recall the days of the Cold War.

The US and other Western countries started major military maneuvers with around 100 warplanes in Scandinavia near the border with Russia on Monday. The exercise in northern Norway, Sweden and Finland is presumably aimed at enhancing the military cooperation between America and the EU.

Russia, in its turn, responded with a major military exercise in Ural and Siberia. Around 12,000 troops and 250 warplanes will conduct military training in air defense until Thursday, the newspaper wrote.