Robo-Firefighter Signs Up for Service With Russian Army 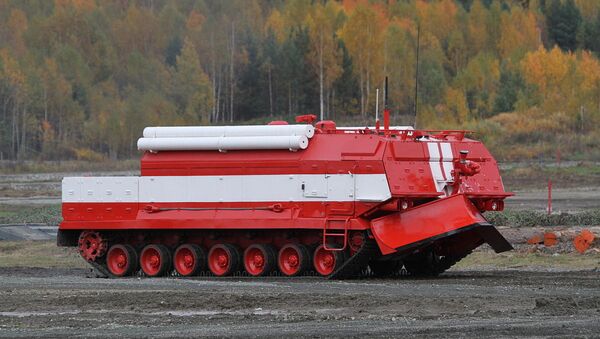 A new robotic firefighting vehicle, based on a battle tank platform, has been put into service with the Russian Armed Forces.

He said that the vehicle will be put through its paces during military drills in Russia's Novgorod region, due to start on May 27.

"The firefighting vehicle was built at the transport machine building plant in the city of Omsk at the order of the Russian Defense Ministry. It was put into service with the Russian Army in early May, and it will begin to be rolled-out to the troops later this year," Bulgakov said.

He added that while the vehicle is designed to fight fires and conduct rescue operations at warehouses and arms depots, it is also capable of fighting forest fires.

According to him, the water jets on the "fire tank" can fire up to 100 meters. The vehicle is equipped with a remote control system that provides maximum safety for the people involved in firefighting in particularly difficult and dangerous conditions.

"In the event of a threat to the crew members' lives, they can leave the vehicle, and it will continue to perform its task via a remote control system," Bulgakov explained.

Russia
Russia’s New Armata Tank Hard to Rival - Russian Deputy Prime Minister
The vehicle also features removable fragment protection armor screens, which along with an armored cabin "protect the crew and the cabin's equipment from fragments during ground blast of high-explosive fragmentation projectile with the caliber of 152 millimeters."

The crew of three in the 60-ton vehicle is protected against heat, with the vehicle's water capacity standing at 25 cubic meters. Additionally, the vehicle is equipped with bulldozer equipment in the form of a wedge-shaped blade to get access to fire area