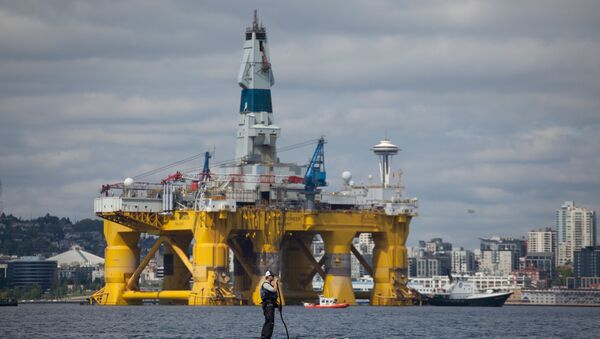 © REUTERS / Matt Mills McKnight
Subscribe
The coast guard is not planning to take any further action against the woman who chained herself to one of Royal Dutch Shell’s support vessels this weekend.

Chiara Rose bonded herself to the Arctic Challenger anchored north of Seattle in Bellingham Bay to protest Shell’s oil-exploration plans in the Arctic.

Activists Slam Shell, Surround Polar Pioneer off Seattle Coast
The coast guard spent the night monitoring her, and authorities have asked her to unchain herself. The ship is not scheduled to leave in the next several days.

“We’re really most concerned for her safety and the safety of everyone involved,” Petty Officer Third Class Katelyn Shearer said Saturday morning.

Royal Dutch Shell is using Seattle’s seaport terminal to contain a floating drill rig called the Polar Pioneer. The challenger serves as a support ship in the event of such hazards as an oil spill.

Rob Lewis, a spokesperson for the Bellingham activists and the man who identified Rose, said his group is not confident that the challenger could prevent an environmental disaster similar to the Deepwater Horizon explosion in the Gulf of Mexico.

According to Lewis, the coast guard has impounded the activists’ support vessels.

Last weekend, protestors in Seattle stormed Elliot Bay in kayaks to protest Shell’s activities in an event they dubbed the “Paddle in Seattle.”