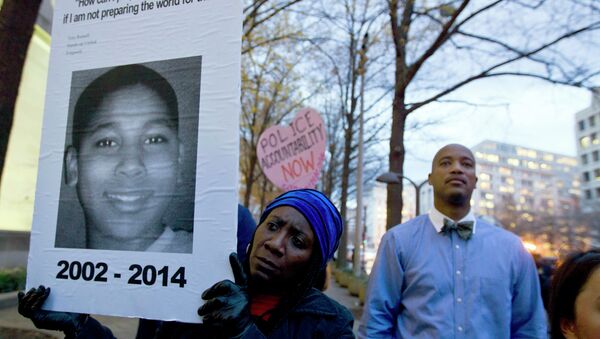 © AP Photo / Jose Luis Magana
Subscribe
International
India
Africa
Following violent protests that erupted in Cleveland after a city police officer was cleared of charges in the fatal shooting of two unarmed men, the city is awaiting another major decision involving police violence. This one involves a child.

Gun of Teenager Shot by Police Officer in Cleveland Probably Fake: Reports
Last year, 12-year-old Tamir Rice was holding a pellet gun when he was fatally shot by a rookie patrolman. An investigation into that case is ending, and it will make its way to the prosecutor’s office, which will decide whether to pursue criminal charges.

About 200 protestors gathered near the home of Cuyahoga County Prosecutor Tim McGinty at noon on Saturday. The gathering later joined another protest at the recreation center where Rice was killed. Even though Rice’s grandfather Eugene angrily called for justice to be brought for his grandson, the protest remained peaceful.

The county prosecutor’s office is investigating the case involving the death of a woman who died in police custody lying face first on the ground and handcuffed. Tanisha Anderson panicked on Nov. 12 when she was put in the back of a patrol car after police responded to a call about her suffering a mental health episode, according to her family. Now, the family is suing the city and the two officers who subdued her.

Cleveland Police Release Video of 12-Year-Old Boy Shot by White Officer
Saturday’s protests emerged after Judge John P. O'Donnell delivered his verdict clearing Officer Michael Brelo of criminal charges in the deaths of Timothy Russell and Malissa Williams, who were inside a car met with a barrage of bullets fired by multiple police officers after a high-speed chase on Nov. 29, 2012.

The prosecution in that case failed to prove that Brelo meant to kill the two suspects when he stood on the hood of their Malibu. O’Donnell also ruled that the last 15 shots were justified because Brelo believed that someone inside the car fired at police throughout the chase.

Five other police officers involved in the shooting were charged by a grand jury with misdemeanor dereliction of duty for failing to control the chase. All pleaded guilty. No trial date has been set.

The city of Cleveland has paid the families of Russell and Williams $3 million to settle a federal civil rights lawsuit.