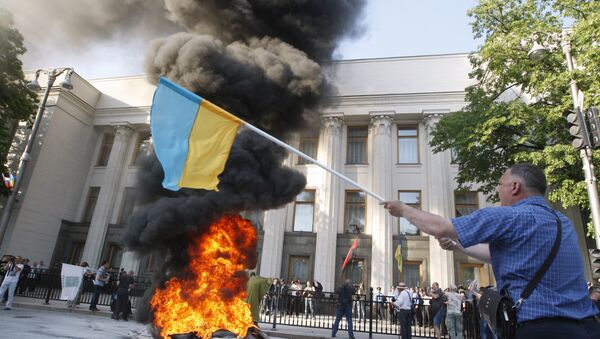 Ukraine’s international creditors, both the commercial overseas entities and neighboring Russia, are most interested in Kiev avoiding a default, even more so than Ukraine itself, meaning the commenced negotiations are likely to end in a compromise deal.

Kristian Rouz — Despite the recently adopted bill enacting the debt moratorium, Ukrainian authorities have clearly indicated their commitment to avoid the looming sovereign default on the excessive governmental and government-backed obligations. Having started negotiations with creditors that provided roughly $23 billion out of the total $42.5 billion in Ukraine's debt, the government in Kiev seems reluctant to rewrite the nation's credit history.

Kiev in Hot Water: Int'l Investors Suing Ukraine for 8 Billion Dollars
The civil war-exhausted Eastern European nation has found itself in a complicated financial situation. Ukraine has accumulated a significant governmental and government-backed debt of $42.5 billion as of April 2015, compared to some $37.5 billion in January 2014 and $38.6 in January of 2013, the year after President Viktor Yanukovych was forced from office in a coup.

Ukraine added some $4.5 billion in debt in March 2015 alone, hence the dramatic increase in absolute numbers. The nation's GDP amounted at some $177.43 billion at the start of 2014. However, the Ukrainian economy has been shrinking ever since. The civil war that erupted in spring of 2014 in parts of the eastern regions of Donetsk and Lugansk coupled with the reunification of the Crimean peninsula with Russia contributed greatly to the decline in the nation's GDP.

While some sources claim Ukraine is in fact bankrupt as of May 2015, this is not necessarily the case. The main issue is the lack of reliable measurements of the actual plunge in the nation's economy. Ukraine's GDP declined only some 7.5% in 2014, as stated by the nation's central bank. Adding to that, in Q1 2015 Ukraine's GDP was an annualized 17.5% down (at about $146.37 billion), much of the loss attributed rather to war damage and disrupted territorial integrity than by economic depression. Nonetheless, the actual proportion is hardly possible to estimate.

Kiev is now conducting talks aimed at restructuring some $23 billion of the national debt. The most prominent bondholder group owning some $10 billion of Ukraine's $42.5 billion debt is led by Franklin Templeton. Another of Ukraine's creditors is Russia, holding $3 billion of Eurobonds maturing this December, the money Moscow provided to Yanukovych's government in late 2013, just before the regime change that came about in early 2014.

Now, Russia stated it had no intention to claim debt repayment before this December, however, the Kremlin became jumpy after the Ukrainian parliament enacted the debt moratorium law, even promising ‘serious consequences' if Ukraine defaulted or failed to fulfill its $3 billion obligations to Russia in any other way.

Moscow expects a $75 million debt servicing payment in June, which might not come as a consequence of the Ukrainian moratorium law. Ukraine thus might face an International Court of Justice (ICJ) lawsuit. However, the issue of debt obligations before Russia is not the biggest one for Ukraine at this point. In the end, it's only $3 billion out of a total $42.5 billion debt burden.

Russian Prime Minister Vows Tough Response to Kiev's Failure to Repay Debts
Ukrainian bonds are on the rise surprisingly. Some $2.6 billion of bonds due July 2017 were advancing three days straight during this past week, adding 0.1 cent to 46.1 cents on the dollar. The dynamics in bond yields are also promising, meaning Ukraine's debt-holders are actually benefitting from the situation and are least interested in the nation's default. In fact, it is in creditors' best interest that Ukraine not only avoided a default, but also borrowed even more international funds to be serviced in the future.

Besides, a favorable situation in Ukraine's bond market is a signal of less risk in the overall economy.

The IMF suggested a scenario for Ukraine's debt to be restructured in a way that means some 40% of the nation's debt will be written off by certain ‘debt operations.' However, private creditors are not interested in writing off a penny of the debt (naturally), and that's where Kiev is seeking compromise. The World Bank is not funding Ukraine, potentially missing an opportunity to improve its portfolio, as US backing for Ukraine's economy seems solid. For instance, private creditors have indicated their willingness to compromise, disclosing the details of all parties involved in response to Ukraine's criticism of the situation as ‘lacking transparency'. Last week, the aforementioned Templeton, along with BTG Pactual Europe LLP, TCW Investment Management Co. and T. Rowe Price Associates Inc. said the talks would ‘commence immediately.'

If the negotiations are successful, the IMF will provide another $17.5 billion tranche to Ukraine, which is basically a solution for most of Ukraine's financial troubles for at least a while. Kiev now has a $15 billion financial gap to be filled by the end of June. The IMF's decision is forecast to be political, meaning the money will be provided and Ukraine is likely to avoid the default. However, the actual outcome might be more chaotic than expected, as Ukraine seems ready to default.

The creditors will have to accept the reality whatever it turns out to be, but for now, the bondholders are more interested in Ukraine avoiding default. In case the default occurs, further negotiations will continue in court according to international law, meaning the creditors will likely lose most of their investment. On the contrary, if Ukraine gets more loans, the creditors will eventually lay their hands on that money plus a premium of Ukraine's future profits. Also, Kiev is scheduled to pay some $500 million to its European creditors in September (which is a lot more than the $75 million payment to Russia due in June), meaning the negotiations are bound to intensify in the summer.

A compromise deal is most likely to meet the interests of creditors, including Russia. The nation's debt will reach $60 billion if the talks are successful, with GDP hovering just above $140 billion, the debt-to-GDP ratio would be about 42.8%. At the same time, Ukraine's total foreign debt, including private obligations, has exceeded $126 billion, almost equaling its battered GDP. That said, Ukraine's government has room to borrowing so far, but the IMF will push through tough reforms and a crippling austerity agenda for Ukraine if it wants the international investment in Ukraine to pay off eventually.