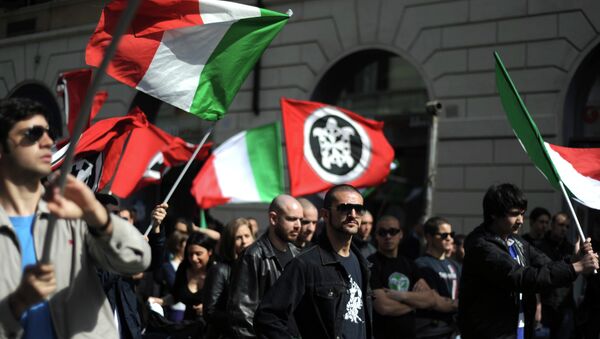 © AFP 2021 / GABRIEL BOUYS
Subscribe
Thousands of fascists and antifascists marched on Saturday in the Italian town of Gorizia, on the border with Slovenia, to mark the 100th anniversary of Italy' entry into the First World War.

English Defence League Marches in London, Anti-Fascists Stage Counter-Rally
A march organized by Italy's largest neofascist organization, CasaPound, passed through the town of Gorizia on Saturday, while a smaller counter-demonstration was organized by antifascist protestors.

Anti-Fascism Fight Lays Down Italy’s Ethical Foundation - President
According to a report from the Slovenian news portal Zurnal 24, the participants of the CasaPound demonstration numbered several thousand, while the counter fascist demonstration attracted more than one thousand participants.

The Italian newspaper Messagero Veneto reported that more than 2,000 participants took part in the military-style parade from CasaPound, in which marchers moved in rows of five, in silence. In contrast, wrote the paper, the antifascists in the counter-demonstration, which numbered around 500-800, were "noisy, colorful and in no particular order," and their event featured rock music, drums and beer.

Roberto Criscitiello, one of the organizers of the antifascist rally, told the newspaper that in his opinion the demonstration "went very well."

"The political outcome is positive, because we forced the organizers to change their course. Maybe there were more of them [the fascists] but theirs was a national demonstration, ours a regional one."

The two demonstrations were kept apart by the presence of hundreds of police officers, some in riot gear, who ensured the protests took place without incident.

"The worst is that ordinary people don't take notice of this the way they should," said Anton Spacapan, one of the organizers of the antifascist protest. "For them, they're only concerned about security, not about the glorification of war, xenophobia and intolerance."

The march was organized by CasaPound to coincide with the 100th anniversary of Italy's entry into the First World War, a date celebrated by the Italian far right, since as a result Italy agreed to the 1915 Treaty of London with the Triple Entente, a secret pact in which Italy was ostensibly guaranteed a large part of the eastern Adriatic coast, including parts of modern-day Croatia and Slovenia. When Italy didn't end up getting this territory, which became incorporated into the newly-established state of Yugoslavia, it felt betrayed by the Allies, setting the stage for Benito Mussolini's rise to power in the 1920's and the establishment of Europe's first fascist state.

Posted by CasaPound Italia on Saturday, 23 May 2015

The rally's organizers, who billed the demonstration as a celebration of the Great War "as a shining example for Italians today," chose the town of Gorizia, on the border of Slovenia, for the demonstration to take place.

On Friday Slovenian Prime Minister Miro Cerar, speaking in Riga from the Eastern Partnership conference, said he had spoken with Italian Prime Minister Matteo Renzi about the matter, which he said was a "a great provocation," and called on the Slovenian Foreign Ministry to react appropriately.

"It has to respond firmly, because this is a totally unacceptable and intolerable demonstration, even more so if it moves across the border," said Cerar.

"We trust that the Italian authorities, who have given permission for the rally, in accordance with their law, ensure that it takes place without incidents and does not extend to the Slovenian side [of the border]," stated the Foreign Ministry.