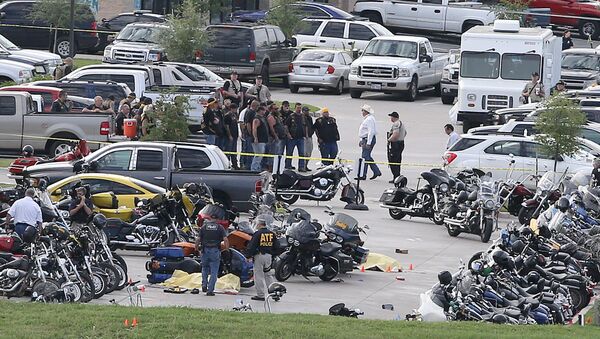 © AP Photo / Jerry Larson
Subscribe
In the wake of a Waco, Texas shootout that left nine dead and eighteen injured, the Texas state legislature on Friday passed a bill that would allow citizens licensed for concealed-carry firearms to reveal their holstered handguns.

One officer called the shootout between motorcycle gang members the worse crime scene he had seen in his career. However, the violent incident that led to nine people being killed hasn't stopped the Texas legislature from passing a bill that would make it legal to openly carry firearms.

'Twin Peaks' Shooting in Texas Kills Nine, Several Injured
The bill’s sponsor Craig Linton Estes says the bill would have made no difference in the events that took place at the biker rally in Waco, where police recovered 118 firearms and an AK-47

“All of us were horrified at what happened in Waco,” Estes said. “I truly do not think that this bill we are working on today, whether it’s as it is now or in law at the time, would have made any difference with that lawless bunch of people.”

HB910 is now on its way to Texas Governor Greg Abbott after being passed by a state committee a day after the Waco shootings. Abbott has expressed that he will sign the bill.

Estes believes that few people involved in the Waco violence were licensed to carry firearms in Texas.

“These are lawless people, and the people we’re trying to help are law-abiding citizens and gun owners,” said Estes.

Texas Police Detain 192 Suspects in Twin Peaks Shooting
The bill was passed by 20 votes to 11 in the state senate after many Democrats led an hour-long probe into an amendment preventing law enforcement from asking about firearm licenses.

So, far 8 amendments to the open-carry bill have been dismissed including a background check requirement, and a provision to force handgun owners to display licenses on their gun holsters.

The bill was passed as a separate bill that would allow for the carrying of firearms at college and university campuses makes final legislative rounds.

Speaking about legislative priorities, Texas Lieutenant Governor Dan Patrick expressed admiration toward the House and Senate for the recent agreement.

“Lastly, the issue of open carry will finally be passed and Texas will join the large majority of states who allow open carry,” said Patrick. “I am proud of the fact the legislature is making history while defending life, liberty and our second amendment right.”