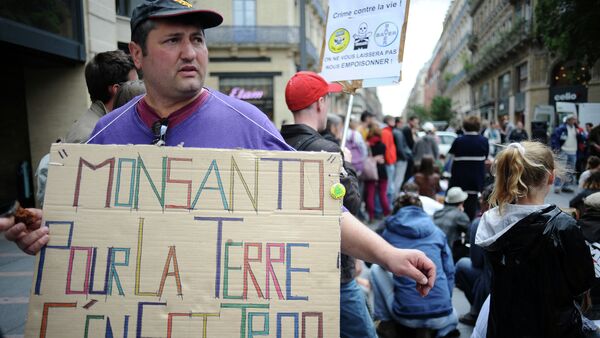 © AFP 2021 / REMY GABALDA
Subscribe
Cities across Europe hosted thousands of protesters on Saturday against the US agrochemical corporation Monsanto to draw attention to hazards surrounding its genetically modified seeds and chemical herbicides.

A live feed of a webcam in Amsterdam depicted hundreds gathering in front of a stand at the central square. The Netherlands' GroenLinks (translated as Green Left) party claimed good turnout in the northern city of Groningen on its Twitter account.

The MAM group, coordinators of the protest actions, claimed on its website that 428 cities in 38 countries were planning to hold peaceful demonstrations on Saturday.

Earlier, at least three French cities out of 12 registered on the group's website, held demonstrations against Monsanto, and protests in Australia, South Africa and Ghana were particularly active.

A Monsanto spokesperson told Sputnik earlier in response to protesters' accusations that people are free to express their opinion, adding that the company is committed to "making a more balanced meal accessible for everyone."