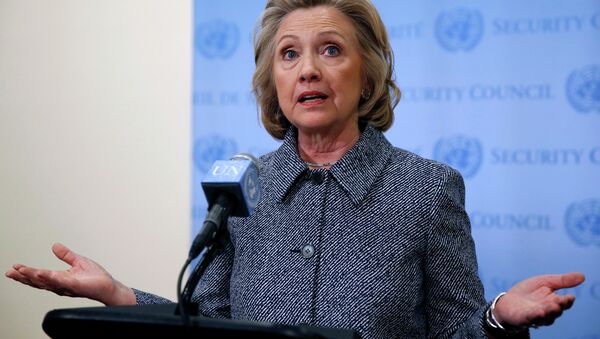 Clinton’s e-mails released by the US State Department reveal that she was aware of dangers to the life of US Ambassador in Benghazi 18 months before he was murdered.

WASHINGTON (Sputnik) — Hillary Clinton’s e-mails released by the US State Department on Friday reveal that she was aware of dangers to the life of US Ambassador Chris Stevens in Benghazi 18 months before he was murdered.

"The situation in Ajdabiyah has worsened to the point where Stevens is considering departure from Benghazi," an April 10, 2011 document sent by an unnamed State Department official said.

On September 11, 2012, Islamic militants attacked the US diplomatic consulate in Benghazi, Libya, killing Stevens and three other Americans.

However, the April 10, 2011 message revealed that the State Department was considering evacuating Stevens from Benghazi even then.

"The envoy's delegation is currently doing a phased checkout (paying the hotel bills, moving some comms [communications] to the boat, etc.)," the unnamed official wrote in that dispatch forwarded to Clinton.

Another Hillary Flub? Turns Out, Clinton had Second Secret Email Address
The official's message continued, "[N]o decision has been made on departure."

The message indicated the State Department did not want Stevens to leave Benghazi for political reasons.

"Departure would send a significant political signal, and would be interpreted as the US losing confidence in the TNC [Transitional National Council — interim government of Libya]," it said.

In a later e-mail on June 10, 2011, State Department official Jacob Sullivan again warned Clinton, "There is credible threat info [information] against the hotel that our team is using."

"DS [US Department of State is] going to evacuate our people to alt [alternate] locations. Info [information] suggested attack in next 24-48 hours. Will keep you posted," he wrote.

The Republican-led Congress has established a Committee to look into the 2012 attacks in Benghazi. Congress continues to probe into the Benghazi attacks.

More than that, the e-mails revealed that US officials characterized the terrorist attack on the US diplomatic compound in Benghazi as spontaneous despite having prior intelligence the attack had been premeditated.

On September 13, 2011, Clinton received intelligence from sources close to then-Libyan President Mohammed Yussef el Magariaf that attackers had planned a hit on the US diplomatic compound at least one month earlier, according to the cache of 296 e-mails between Clinton and her inner circle.

“Libyan security officers also informed el Magariaf that the attacks had been planned for approximately one month, based on casing information obtained during an early demonstration at the US consulate in Benghazi,” an e-mail thread between Clinton and her colleagues read.

The e-mail detailed a confidential Libyan intelligence cable, dated on September 13, 2012 — two days after the attack.

“The attackers were, in the opinion of these individuals, looking for an opportunity to approach the consulate under cover in a crowd,” the e-mail stated.

Clinton's Election Prospects Compromised by 2012 Benghazi Attack
On September 16, 2012, then US Ambassador to the United Nations, Susan Rice, said during a talk show that Washington’s “current best assessment” was that the attack was “a spontaneous, not premeditated response to what had transpired in Cairo.”

Libyan intelligence cable three days prior to the Benghazi attack told US officials the attackers appeared to have been “looking for an opportunity to approach the consulate under cover in a crowd,” and used the unrest over the film as a front to launch their attack.

“These officials do believe that the attackers having prepared to launch their assault took advantage of the cover provided by the demonstrations in Benghazi protesting an internet production seen as disrespectful to the prophet Mohammed,” the confidential Libyan intelligence cable read.

The release of some 296 e-mails comes after a US District Court judge on Tuesday gave the State Department one week to decide when it would release portions of the records detailing Clinton’s handling of the Benghazi attack.