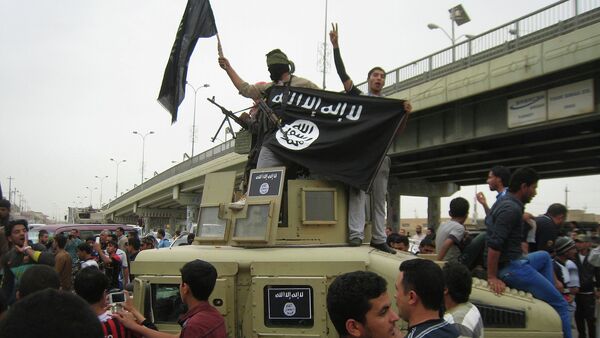 In the latest issue of its propaganda magazine, the self-proclaimed Islamic State (IS) terror group complains they are losing recruits because of supposed "conspiracy theories" tied to the West.

Founded in 2014, Dabiq is the online propaganda magazine used by IS to boast the terrorist group’s victories in the hopes of gaining more recruits. The magazine also aims to portray the group as a functioning state instead of a decentralized, non-state terrorist actor.

The ninth issue of Dabiq, entitled "They Plot and Allah Plots" features a picture of US Secretary of State John Kerry posing beside several key Arab foreign ministers after an anti-IS coalition talk in September 2014.  In addition to bragging about its conquests and supposedly forwarding the word of Allah, the magazine also features an article in which it warns about Western and infidel-backed "conspiracy theories."

Entitled "Conspiracy Theory Shirk [sin]," the article implies that the group’s fighters have become delusional because of what it claims to be conspiracy theories about IS being a puppet for Western intelligence.

"If the mujahedeen [IS] liberated territory occupied by the kuffair [infidels], they would say that the kuffar allowed them to do so because kafir [infidel] interests’ necessitated a prolonged war," the article reads.

It goes on to suggest that the purported conspiracy theories have led IS fighters to flee the jihadist cause.

"Conspiracy theories have thereby become an excuse to abandon jihad, to have great awe for the kuffar, to forsake the obligation of bay’ah [allegiance] and pursue the Dunya [mortality], all in the name of political 'awareness.'"

It implicates a myriad of parties, some of which are at odds, in the conspiracy, including Qatar, Turkey, the US, Iran, Iraq, and the Syrian National Council. After slamming these players, the article continues to portray IS as the defender of Islam against the purported heretics.

"The purpose of conspiracy theories is to exaggerate the power of the kuffar and thereby the Muslims become paralyzed by analysis of current events and eventually fear the kuffar more than they fear Allah."

"As for when the cooperation with the kuffar against Muslims is clearly public, it suddenly becomes maslahah [for the greater good]," it continues, poking fun at the supposed narrative of the US-led coalition and positioning itself as the only legitimate Muslim player against the West. "It is maslahah to cooperate with the Americans against the Islamic State, not a conspiracy of treachery."

Another article of the magazine is additionally dedicated to praising the self-described IS sympathizers behind the botched terrorist attack on a Texas cartoon contest in April.

In an alarming article presumably penned by a woman, identified as Umm Sumayyah, the magazine uses supposed religious grounds to justify IS’ enslavement and rape of Yazidi girls in the summer of 2014.

Entitled "Slave-Girls or Prostitutes?" the piece includes decontextualized Quranic verses loosely strung together to justify the forced marriages many of those girls were entered into.

The author further claims that the enslavement and rape of the girls by IS militants should not be denied by the group’s sympathizers, as it adheres to the group’s warped and perverted interpretation of the religion.