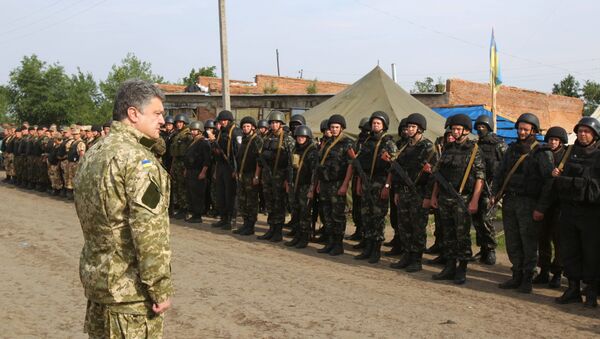 The Verkhovna Rada denounced agreements on military cooperation, the mutual security of secret information, cooperation in military reconnaissance and the organization of military logistics with Russia.

“The goal of the legislation is the security of national interests, independence, sovereignty, and the territorial integrity of Ukraine,” an explanatory note to the legislative act reads.

The intergovernmental agreement was signed December 2, 2000, in Moscow and was ratified by the Ukrainian Verkhovna Rada on November 15, 2001.

Russia to Sue Ukraine if Moratorium on Foreign Debt Repayments Adopted
The Ukrainian parliament also denounced an intergovernmental agreement between Moscow and Kiev on military cooperation.

Kiev scrapped the agreement on the pretext of alleged "Russian destructive activities in Ukraine", an explanatory note accompanying the legislative act reads.

The agreement was originally signed on November 25, 1995 in the city of Sochi and was ratified by Ukraine’s Verkhovna Rada on January 10, 2002.

"Cooperation between the special forces of our governments, including military reconnaissance, has become impossible and is considered treacherous to the national interests of Ukraine,” an explanatory note accompanying the legislative act reads.

The original intergovernmental agreement was signed on August 26, 1997 in Kiev and was ratified by Ukraine’s Verkhovna Rada on February 7, 2002.

US, NATO Have ‘No Plans’ to Place Missile Defense Systems in Ukraine
The Ukrainian parliament on Thursday denounced an intergovernmental agreement with Russia on the organization of military logistics.

“In the current conditions cooperation in the organization of military intergovernmental military logistics between our governments has become impossible since it completely does not comply with objective situations and is treacherous to the national interests of Ukraine,” an explanatory note accompanying the legislative act reads.

The original agreement was signed on November 25, 1995 in Sochi and was ratified by Ukraine’s Verkhovna Rada on September 12, 2002.