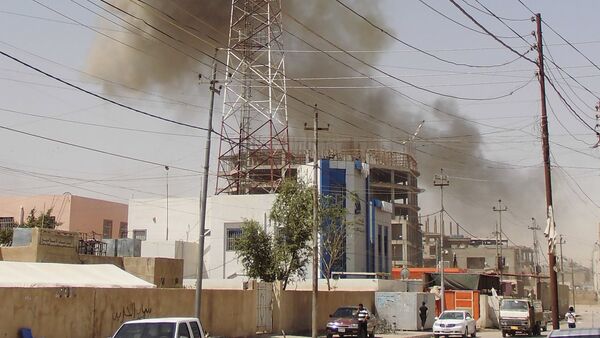 On Sunday, following several days of heavy fighting against government forces, the ISIL took control of Ramadi, some 70 miles from Baghdad. Hundreds of Iraqi servicemen were killed and many more fled the city.

Almost 25,000 Flee Iraqi Ramadi Amid ISIL Attacks
On Tuesday, photos circulated on ISIL-affiliated Twitter accounts and forums, featuring young children on the battlefield firing short-range rockets. The pictures have been greeted with enthusiasm by the militants’ supporters.

This is not the first time ISIL has released media featuring minors with weapons, dubbed the "cubs of the caliphate." In January, the terrorist group posted a video showing a boy executing two men, accused by the group of being Russian spies.

According to a report by Human Rights Watch, released in June 2014, radical Islamists recruited schoolchildren in Syria under the guise of education campaigns and tasked them with dangerous missions, including suicide bombing.

The Islamic State is a Sunni jihadist group that since 2014 has captured vast territories in Iraq and Syria, proclaiming a caliphate on the lands that have fallen under its control. The group is notorious for its brutal methods, numerous killings and human rights violations.