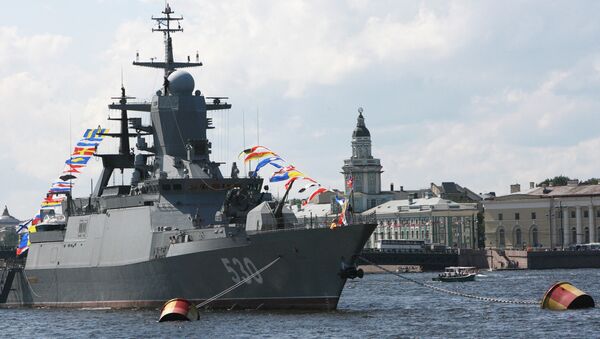 MOSCOW (Sputnik) – The first two vessels of the Project 20385 class, which is a derivative of the Steregushchy class (Project 20380) corvette featuring better electronics, air defenses and extended operational range, are the Gremyashchy and the Provorny corvettes.

“Foreign-made equipment was installed on Project 20385 corvettes, and certain problems have emerged due to present-day events,” said Leonid Kuzmin, the marketing director of the Severnaya Verf shipyard.

The two vessels are in various stages of completion and will be equipped with domestically-produced substitutes of foreign-made spare parts.

“Our shipyard is currently building two ships, and the possibility of replacing the [foreign-made] equipment [with domestically produced parts] is now being studied, but, apparently, the two corvettes will remain the only ships of their class.”

Construction of Two New Naval Corvettes Begins in Russia
According to earlier reports, a German contractor terminated a deal to supply engines for the warships last year, citing the sanctions imposed on Russia over the crisis in Ukraine.

The engines are to be replaced with their advanced Russian-made counterparts which are still undergoing trials.

Under the contract with the Defense Ministry, the Severnaya Verf was to build at least 10 Gremyashchy class corvettes for the Russian Navy.

The remaining eight ships will be built as the Steregushchy class corvettes.

World
Russia’s 5 Most Deadly Naval Weapons as Seen by US Media
The Steregushchy and Gremyashchy class corvettes can be used against enemy surface ships, submarines and aircraft, and provide naval gunfire support for shore operations.

The Gremyaschy class corvette has a displacement of 2,200 metric tons, maximum speed of 27 knots, operating range of 4,000 nautical miles and a crew of 100.

The ship's armament includes Uran-E 3M24 (SS-N-25 Switchblade) anti-ship cruise missiles, a 100-mm gun, a variety of air defense and anti-submarine systems and a Ka-27 Helix anti-submarine helicopter. Advanced stealth technology is used to reduce the ship's radar signature, as well as its acoustic, infrared, magnetic and visual signatures, according to the shipbuilder.