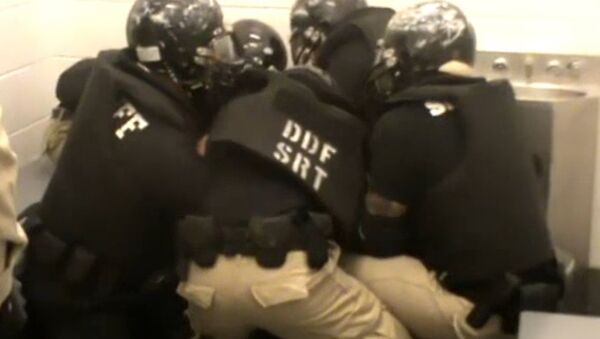 © KFOX/ El Paso County Sheriff's Department
Subscribe
A two-day sentence for a DWI at an El Paso, Texas jail went horribly wrong for one Fort Bliss soldier, whose unexpected medical emergency was met with riot gear instead of medical care.

Sgt. James Brown, a 26-year-old active duty soldier, checked in at the El Paso County Jail on a Friday, to serve a two day sentence in July of 2012. He did not survive the weekend.

Graphic video of Brown's final moments, taken by a guard and obtained by local news station KFOX, show that, after some sort of medical incident in which Brown started bleeding in his cell — when he is unable to respond to officers' questions — a group of them enters his cell in riot gear.

After a struggle, in which Brown repeats at least 20 times that he cannot breathe, he is cuffed, taken to another room, and made to wear a "spit mask." In the span of about 35 minutes he goes from pleading for air and water to unresponsive. His family’s attorneys say medical help was never called in. He was taken on a gurney to University Medical Center where he was pronounced dead.

Brown had served two tours in Iraq and was a decorated soldier. He had no criminal history. Shortly after he arrived for his weekend sentence, he called his mother.

"He said 'They're trying to make me stay seven days instead of two days, so i just want to pay the court fine and get out of here,'" Dinette Robinson-Scott told KFOX.

She wired him the money for the court fine the next morning, but it was too late.

"I'm Choking on My Blood"

Jason Bowles and B.J. Crow, attorneys for Brown's family, say that the video proves that Brown's constitutional rights were violated.

"When a 26-year-old man checks into jail for a court imposed sentence on a Friday, and he leaves Sunday in a casket, something went horribly wrong there," said Crow.

From the time the officers enter his cell, he can be heard telling officers that he cannot breathe, and that he's choking on his blood. The group mobs him and handcuffs him, eventually carrying him out of the cell when he is incapable of doing so on his own. 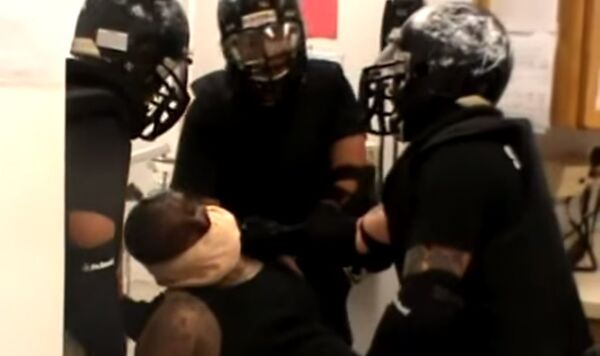 Sgt. James Brown is pictured here surrounded by officers, handcuffed and wearing a "spit mask," which he repeatedly asked to have removed because he was having trouble breathing.
© KFOX/El Paso County Sheriff's Department

Later, still cuffed, and still repeating that he cannot breathe, he can be seen in another room where a "spit mask" is placed on him, which he repeatedly asks officers to remove so he can breathe more easily.

He also asks for water repeatedly. They tell him to "Wait a little while, ok?" as the officer explains they are waiting for the medication — lorazepam, according to KFOX — to kick in. He eventually gets a few sips and then the mask goes back on.

At one point, Brown — who informed the jail in writing when he checked in that he suffers from post traumatic stress disorder — cries out, "I already told you earlier, I have f***ing problems, dude!" as he tries to explain that he can't relax if he can't breathe.

The autopsy results showed no illegal drugs present in his body and indicated a sickle cell crisis as the cause of death. The condition can remain dormant in an individual until it's triggered, usually by stress or dehydration. But Brown's family says he had no history of the condition, nor was any such crisis triggered during two tours in Iraq.

"He was bleeding out the ears, the nose, the mouth, his kidneys shut down, his blood pressure dropped to a very dangerous level, and his liver shut down," said Crow. Attorneys are preparing for a federal civil trial in October and are suing for damages over the use of excessive force and the denial of medical treatment, all while knowing Brown suffered from PTSD.

The Sheriff's office is declining to comment on medical evidence because the matter is still an open case.

"Mr. Brown’s death was an unfortunate tragedy," said El Paso County Sheriff Richard Wiles in a written statement. "The sheriff’s office has conducted a thorough review of the facts surrounding Mr. Brown’s death and, based upon all the evidence obtained, determined that his death was caused by a pre-existing medical condition. The specific evidence cannot be discussed because of pending litigation."

The video was recently released by the Texas attorney general's office to a local news station, and Brown's mother said she wanted the public to see it, to know what had happened.

"I pray that new laws protecting soldiers in custody will be implemented, that the military adopt new policy procedures in regards to their soldiers being held in custody by an outside agency," Robinson-Scott said in a statement.

"If these changes can be made and our soldiers are protected, and another family never has to experience what my family has, then my son's death would not been in vain."