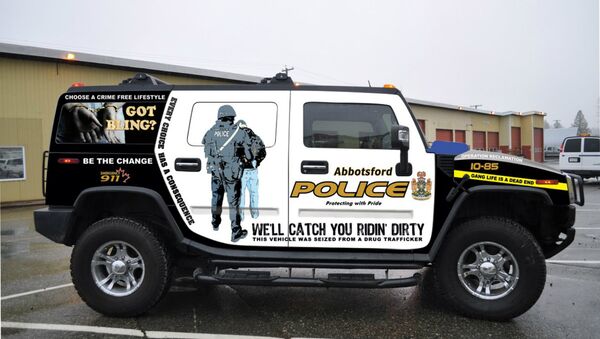 © bcgovphotos
Subscribe
Under the US Justice Department's Asset Forfeiture Program, the government is allowed to take your belongings, cash, even your home, without convicting you of any crime. The amount collected has been steadily increasing over the last decade, and it’s a cash cow for local law enforcement agencies.

“Probable cause for an administrative forfeiture is defined as a reasonable ground for belief of guilt, supported by less than prima facie proof, but more than mere suspicion.”

In 2014, government agencies seized $4.6 billion in more than 10,000 forfeitures, CNBC reported on Tuesday.  Police departments keep approximately 80% of the money they bring in through this program, and they’re spending it in some really absurd ways:

The district attorney’s office in Worcester County, Massachusetts bought a Zamboni with asset forfeiture funds in 2012.

It was reported in 2012 that police in Bal Harbor, Florida, spent over $23,000 on fancy vacations including rentals of luxury cars.

In Montgomery, Texas, the district attorney bought rum, tequila, kegs, and a margarita machine in 2005.

In Romulus, Michigan, the police chief bought his wife a tanning salon (he and five detectives are facing racketeering charges.)

With perks like those, it is easy to see why the drug war, instead of drug treatment and substance abuse prevention, is a high priority for police departments.   It is estimated that the money spent enforcing marijuana laws is double what is being spent on education in the US.

Law enforcement in Albuquerque, New Mexico has faced much media criticism for seizing $16,000 in cash that Joseph Rivers, 22, had saved up and received as gifts from relatives so that he could move to Los Angeles and pursue his dreams.

Rivers was carrying the money as he attempted to board an Amtrak train in April.  He was not detained, or charged with any crime, but his money was taken by DEA agents during a random stop on the train as the agents questioned various passengers.

He has pointed out that he was the only person on board the train who was searched, and was also the only African-American person in that portion of the train.

“I even allowed him to call my mother, a military veteran and (hospital) coordinator, to corroborate my story,” Rivers told the ABQ Journal of his encounter with one of the agents. “Even with all of this, the officers decided to take my money because he stated that he believed that the money was involved in some type of narcotic activity.”

“We don’t have to prove that the person is guilty,” Sean Waite, the agent in charge for the DEA in Albuquerque told the ABQ Journal. “It’s that the money is presumed to be guilty.”