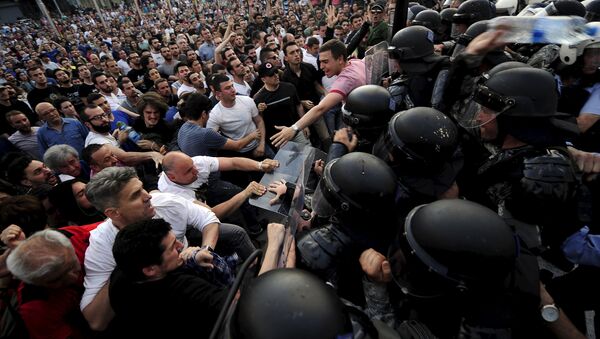 Anti-government protests and a Western attempt to stage a coup in Macedonia will not succeed, as the majority of people are firmly behind current Prime Minister Nikola Gruevski, a political expert specializing in Macedonian politics, told Sputnik.

Sputnik spoke with several Macedonian affairs experts about the current political situation in the country in an attempt to understand what is really going on, who is behind the anti-government protests and what is at stakes if there is a regime change in the small Balkan state.

Unrest in Macedonia Follows ‘Regime Change’ Scenarios Used Worldwide
On Sunday, an anti-government protest took place on the streets of the Macedonian capital Skopje. During the protest, Macedonian opposition leader Zoran Zaev blamed the government of current Prime Minister Nikola Gruevski for Macedonia's social and economic problems, and accused several Cabinet members of corruption. Zaev demanded the resignation of the current government and called for the creation of a new transitional government.

A day after that, a mass pro-government rally took place in Skopje. The event was attended by some 90,000 people in support of Gruevski's government.

Vladimir Pandovski, a Skopje-based political analyst who focuses on social media and propaganda, assured that everything happening in Macedonia right now has been staged, similar to the Maidan protests; however, unlike Ukrainians, the vast majority of Macedonians support the current prime minister and the world might see the first failed attempt of Western-backed government overthrow.

"Everything is fixed. We've seen this theater before," Pandovski said, explaining that Western intelligence services are behind the anti-government protests.

Gruevski is a popular leader in Macedonia. Although his government is currently under pressure from foreign embassies and media, it looks like Gruevski has a plan on how to overcome the Western-staged anti-government demonstrations. As long as the people of Macedonia are firmly behind Gruevski, a Western-backed attempt at a coup will not succeed, Pandovski said.

Serbian political scientist Dusan Prorokovic, the former Secretary of State for the Ministry of Kosovo and Metohija, told Sputnik:

"Ambassadors from the United States, several EU countries and the head of EU delegation to Macedonia attended the anti-government protests in Skopje. If something similar happened in a stable country, these ambassadors would have been sent back home within 48 hours."

Prorokovic also added that as soon as Macedonia started to build relations with Russia and work with China to develop economic opportunities in the Balkans, the situation in the country suddenly radicalized, as the West certainly did not like the steps taken by Gruevski's government.

People Power or Western Meddling? Macedonia Unrest Reveals Differing Views
Georgy Engelhardt, a political expert from the Russian Academy of Sciences, said the current government in Skopje decided not to follow the example of most European countries and refused to impose sanctions against Russia. Macedonia, being heavily dependent on the export of agricultural products, could not afford to lose the Russian market.

Second, Macedonia could potentially become a corridor-country for Russia's Turkish Stream, a natural gas pipeline from Russia to Turkey. Since the United States and the EU worked hard to close down Russia's South Stream last year, they are now trying to block Macedonia from taking part in the South Stream project, Engelhardt said.

The West does not really care who is in charge of Macedonia, but since Gruevski, despite previous hints from the EU to turn down any cooperation with Russia, refused to follow the EU orders and showed his own political will, the West decided to use other means to force Macedonia to abandon its pipeline dream. If the anti-government protests succeed and Zaev becomes the new leader of Macedonia, the country will stop the pipeline project and impose anti-Russian sanctions, Engelhardt told Sputnik.