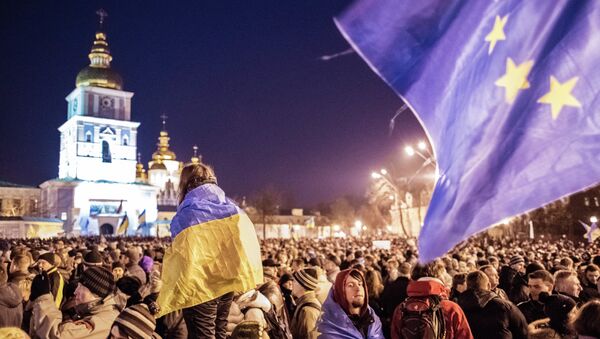 The process of Euro-integration failed to bring any positive results for Ukraine, Vesti.ua reported.

Politicians in Kiev lack the courage to admit the bitter truth: the overthrow of former president Viktor Yanukovych did not bring Ukraine closer to the European Union (EU).

Perhaps, ordinary Europeans sympathize with Ukrainians and may even feel truly sorry about what's happening in their country, but nobody is willing to step up and do something real about it.

Ukraine has a large population and it is too big for Brussels to simply drag the country along using the money from the EU budget, similar to tiny Moldova, for example.

‘Europe Stir Up’: EU Causes Instability in Neighboring Regions
It will be hard for the EU to integrate Ukraine. The Eastern European nation has strong potential and resources to become one of the strongest members of the EU, after Germany, France, Italy, Britain and Spain. Even Polish politicians admit that theoretically Ukraine could have a stronger voice in the administrative system of the EU than Poland, Vesti.ua said.

Ukrainian politicians need to understand that they should not expect a breakthrough from a relationship with the EU. Instead, Ukraine should use the example of Turkey, which finally realized that the EU will not let the country into their union in the foreseeable future, and let go of their illusions and start living on their own.