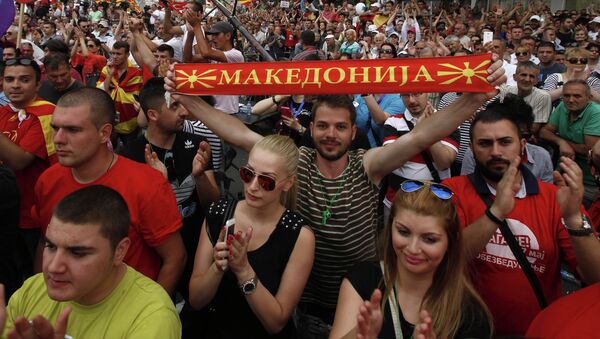 © AP Photo / Boris Grdanoski
Subscribe
The Council of Europe (CoE) with the assistance of the Organization for Security and Co-operation in Europe (OSCE) may create a special advisory group to investigate civil rights violations amid political protests in Macedonia, CoE Secretary General Thorbjorn Jagland said Tuesday.

Macedonian Leader Refuses to Resign 'Without Popular Will'
BRUSSELS (Sputnik) — Over recent months, violent political protests have been held in Macedonia, with numerous reports of civil rights violations.

Speaking at a joint briefing with OSCE Secretary General Lamberto Zannier, Jagland told reporters that a special group is needed for an impartial probe into numeral reports on violations of citizens' rights in Macedonia and for political reconciliation in the country.

Jagland noted that the group could be established on the model of the International Consultative Group on Ukraine set up by the CoE secretary general to investigate the deaths of over 100 civilians in Kiev's central Independence Square during protests, and the May 2 tragedy in Odessa in which some 50 people were killed.

Angry Macedonian Protesters Refuse to Leave Scopje Streets
The CoE secretary general stressed that the establishment of such a group should be discussed with Macedonian authorities. He added that it could be successful provided support from Macedonian government and the opposition party.

On Monday, a pro-government rally of over 90,000 people was held in the center of the Macedonian capital Skopje to support Prime Minister Nikola Gruevski as a response to Sunday's anti-government rally organized by opposition leader Zoran Zaev.

Zaev is demanding the resignation of the current government, accusing it of corruption and social and economic problems in the country. Protesters claim the results of the April 2014 parliamentary elections were rigged.

Gruevski denies all accusations, saying that he would not quit his post and accusing Zaev of attempting a coup.