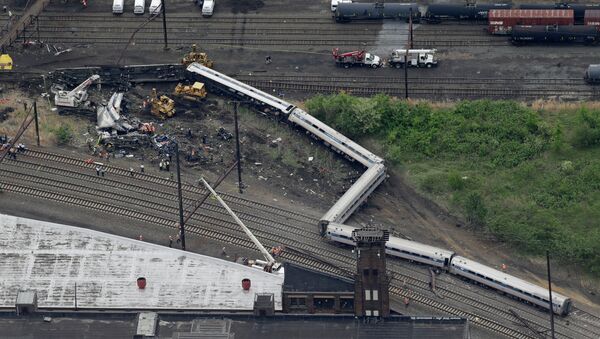 A Philadelphia-based law firm representing the plaintiffs announced that four passengers who were onboard the Amtrak train that derailed near Philadelphia on Tuesday are filing a lawsuit against the US rail company for injuries they sustained in the crash.

WASHINGTON (Sputnik) — Four passengers who were onboard the Amtrak train that derailed near Philadelphia on Tuesday are filing a lawsuit against the US rail company for injuries they sustained in the crash, a Philadelphia-based law firm representing the plaintiffs announced in a statement.

“The first group of seriously injured passengers of the May 12th fatal Amtrak derailment today filed Complaints in the US District Court for the Eastern District of Pennsylvania asserting egregious safety-related failures by Amtrak that caused the catastrophe and resulted in the deaths of eight passengers and injured hundreds others,” Saltz Mongeluzzi Barrett & Bendesky said in the statement on Monday.

On May 12, 2015, Amtrak train 188 travelling from Washington, DC to New York City derailed on the outskirts of Philadelphia after going more than double the speed limit of 50 miles per hour around a curve. Eight people died in the accident and more than 200 were injured.

FBI to Investigate Philadelphia Train Windshield Damage - NTSB
The plaintiffs are Spanish nationals Felicidad Redondo Iban, who is at risk of getting her arm amputated, her cousin Maria Jesus Redondo, New York resident Daniel Armyn as well an unnamed 23-year-old woman from Philadelphia, according to the law firm’s statement.

The plaintiffs accuse Amtrak of recklessly operating the train as well as disregarding US federal legislation that automatically prevents the train from exceeding the speed limit.

"Through its reckless operation on the tracks and inexcusable decision to not include a necessary safety system, Amtrak caused this horrific tragedy,” the plaintiff’s complaints read in the statement.

In addition to compensatory damages, the plaintiffs will also seek punitive damages that will be determined by a jury as their attorneys will likely fire various “discovery-related motions” in the coming weeks, according to the statement.

On Monday, the US National Transportation Safety Board (NTSB) announced that the results into the probable cause of the Amtrak 188 crash would likely be released within a year.