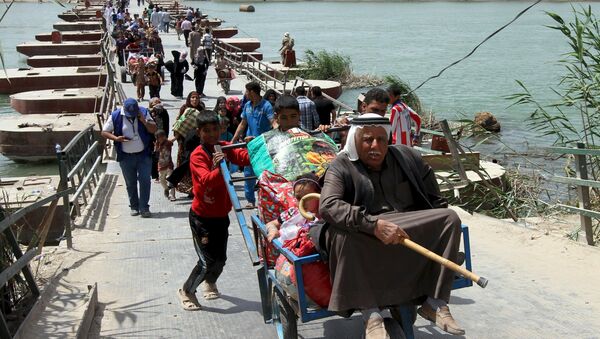 © AP Photo / Stringer
Subscribe
The UN's Humanitarian Coordinator for Iraq said that about 25,000 people fled the Iraqi city of Ramadi amid fierce attacks by ISIL extremist group that started on Friday.

UNITED NATIONS (Sputnik) — About 25,000 people fled the Iraqi city of Ramadi amid fierce attacks by the Islamic State (ISIL) extremist group that started on Friday, the UN's Humanitarian Coordinator for Iraq said in a statement.

"Close to 25,000 people have fled Ramadi, following ISIL attacks and fierce fighting in the city. Most of the displaced are fleeing towards Baghdad, with many trying to enter through security checkpoints," Lise Grande said in the statement published on the UN's website on Monday.

The World Food Programme has handed out thousands of immediate response rations enough for three days to the fleeing people, upon request by the Iraq's government, according to the statement.

On Friday, the ISIL reportedly launched an offensive to take control of Ramadi, located about 68 miles west of Baghdad. Over the weekend, Iraqi soldiers abandoned their positions in Ramadi, giving up the city to ISIL militants.

Regional government officials confirmed the capture of Ramadi on Monday.