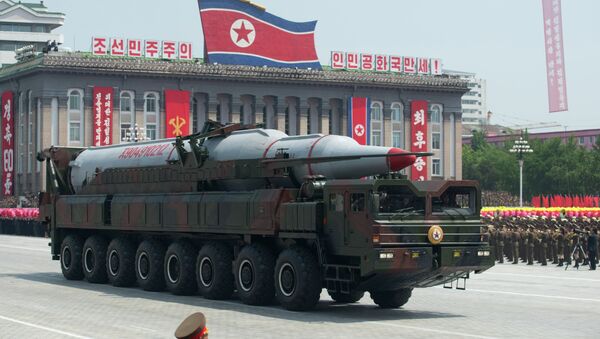 "To date, to this moment, particularly with recent provocations, it is clear the DPRK [Democratic People's Republic of Korea, North Korea's official name] is not even close to meeting that standard," Kerry said at a joint news conference with his South Korean counterpart Yun Byung-se after talks in Seoul.

Instead of taking steps to rein in its nuclear activity, North Korea continues to pursue ballistic missile development, Kerry added.

As Pyongyang has made little progress in denuclearization, the United States and China are negotiating further sanctions against North Korea, Kerry stated.

Iran, which has recently reached a preliminary deal on its nuclear program with international mediators, could serve as an example to North Korea, the US Secretary of State said.

South Korea Alarmed Over North Korea’s Submarine Missile Test-Firing
A six-party set of talks, comprising North Korea, South Korea, Japan, China, Russia and the United States, was launched in 2003 after Pyongyang withdrew from the Nuclear Non-Proliferation Treaty it ratified in 1985.

In 2005, North Korea declared itself a nuclear power. Since then, it has conducted several underground nuclear weapon tests.

Since 2006, the United States and the United Nations have imposed several rounds of sanctions on Pyongyang in response to its tests of nuclear weapons and ballistic missiles.

The negotiations deadlocked in 2009 as North Korea refused to take part in discussions.