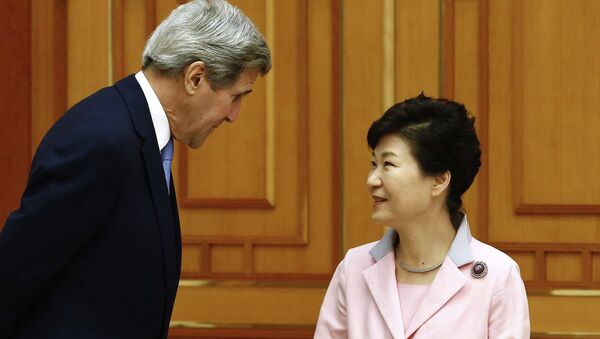 US State Secretary John Kerry, on a two-day visit to South Korea, has announced on Monday the two countries' strong alliance against North Korea, Yonhap news agency reported ahead of talks with Foreign Minister Yun Byung-se.

TOKYO (Sputnik) — The top US diplomat met South Korean President Park Geun-hye earlier, but other than bilateral relations and issues related with Pyongyang, their topics of discussion were not disclosed.

"Locally, we are united firmly in our determination to stand up against any threats from the DPRK [North Korea]."

North Korean Repressions Continue Amid Low Army Rations - Reports
Preparations for Park's upcoming trip to Washington to meet US President Barack Obama in mid-June were also expected to be covered during Kerry's trip to Seoul.

According to Yonhap, Kerry is due to visit the US Army Garrison in Yongsan District and deliver a lecture on cybersecurity in Korea University before wrapping up his visit on Monday.

The state secretary's trip to Seoul was preceded by artillery shells fired by North Korea near the disputed maritime border with South Korea last Wednesday. On May 9, the country's central news agency reported having successfully tested a submarine-launched ballistic missile.

The peninsula formally remains in a state of war since the 1950-1953 Korean War ended in an armistice, but not a final peaceful settlement. Relations between the North and South declined sharply in 2010 after South Korea's Pohang-class ROKS Cheonan corvette was sunk by what Seoul claims was Pyongyang's torpedo.