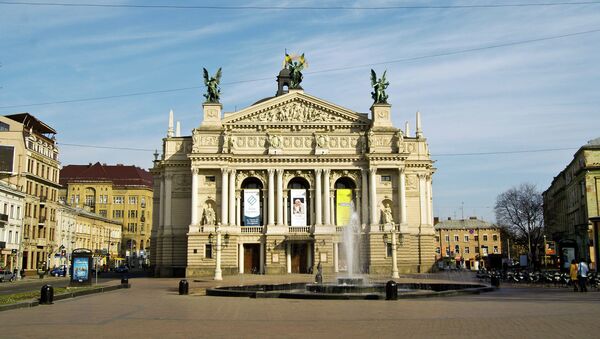 © Wikipedia
Subscribe
Artists of the Lviv National Academic Theater of Opera and Ballet have issued an appeal protesting performers' mass conscription into the Ukrainian army.

In an appeal published on their official Facebook page, the theater's artists have reported that nearly three dozen performers have received draft notices, including members of the orchestra, choir singers, opera and ballet soloists, Honored Artists and even a People's Artist of Ukraine.

The appeal reads: "We the artists are dumbfounded by such a massive intake of qualified cadre from our theater. We stress that for our theater, this far-reaching mobilization will ultimately result in the cancelation of many of our performances, and may lead to the complete breakdown of the theater's work." The appeal also points out the pointlessness of conscripting artists who have spent between 12-16 years on their education and countless years more working in their field.

Noting that their country has not officially declared a national mobilization for war, the appeal protested that "it's as if someone among our officials is deliberately trying to stamp out Ukraine's educational artistic traditions. It would be interesting to know how many sons of our parliamentarians and civil servants have been called up by the Armed Forces of Ukraine."

Combative Instinct: Almost 9,500 Dodge Draft in West Ukrainian Lviv Region
The artists' appeal, which concluded with a call for peace in Ukraine, has led to a comment war inside Facebook.

Those supporting the draft have said that those who have been called up should go and serve, no questions asked. Others, however, expressed their support. One user argued that "I think it's not about 'someone among our officials trying to stamp out Ukraine's educational artistic traditions,'  but about the deliberate destruction of our country in all areas where officials can reach." Others asked what good theater performers would do on the battlefield. "Well, a ballet dancer will be able to run, given that he is in good shape, but he won't run far before being met with a bullet," a user noted. "This is just idiocy," he added.

Earlier this month, German newspaper Handelsblatt reported that over 70 percent of western Ukraine's working age population has fled the country to avoid the draft, with a similar situation facing eastern Ukraine.