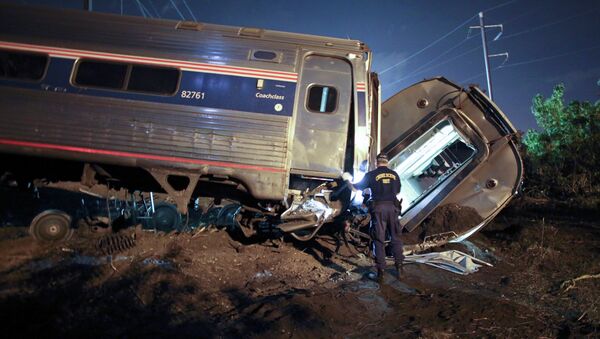 The United States needs to invest continually in national infrastructure and not just after disasters, US President Barack Obama said during a press conference at Camp David, Maryland.

WASHINGTON (Sputnik) — The President comment came in a discussion about Tuesday's Amtrak train crash outside Philadelphia, after he held a summit with the leaders from the six Gulf Cooperation Council nations.

“We are a growing country with a growing economy that we need to invest in the infrastructure that keeps us that way and not just when something bad happens like a bridge collapsing or a train derailment, but all the time. That’s what great nations do.”

On Tuesday, eight people were killed and more than 200 injured after Amtrak train 188, carrying 238 passengers and five crew members from Washington, DC to New York City, derailed near Philadelphia.

“I want to express my gratitude for the first responders, who raced to save lives and for the many passengers who, despite their own injuries, made heroic efforts to get fellow passengers to safety."

The President offered his condolences to the victims’ families and said the US government would concentrate on identifying the causes of the accident.

Amtrak is a US publicly-funded railroad operated and managed as a for-profit corporation and provides intercity passenger train service in the United States.