Western Sanctions Give Impetus to Development of Russian Economy – Lawmaker 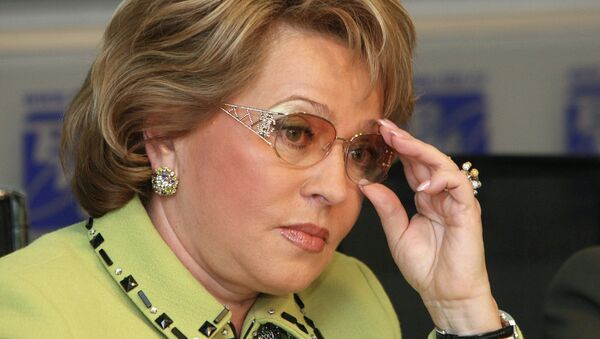 © Sputnik / Vladimir Fedorenko
/
Go to the photo bank
Subscribe
Western sanctions imposed on Russia over its alleged role in the escalation of the Ukrainian conflict only served as an impetus for Moscow to take more efficient steps to develop its own economy, Federation Council Speaker Valentina Matviyenko told Sputnik Serbia on Thursday.

MOSCOW, May 14 (Sputnik) — Having acknowledged that the Western sanctions have caused "certain damage" to Russia, Matviyenko noted that the economies of the European Union member states suffered as well, as Moscow banned food imports from the countries that introduced anti-Russia sanctions.

She expressed hope that common sense would prevail and a political dialogue would be established in order to resolve existing issues.

"The sanctions only prompted Russia to more effectively address its economy, to decrease dependence on Western states by implementing the program of import substitution."

According to the Russian politician, the introduction of sanctions against Moscow opened new opportunities for Russia's cooperation with the states of other regions of the world, including BRICS countries — Brazil, Russia, India, China and South Africa — and the Asia-Pacific region.

"They failed to make Russia change its principle stance on the protection of [its] national interests, to change its independent foreign policy. They were unable to destroy our economy, we are developing at quite confident pace."

Russian Economy Must Achieve Average Global Growth by 2018 - Cabinet
She said the language of sanctions was inadmissible and was not yielding expected results.

Matviyenko also stressed that tying the lifting of anti-Russia sanctions to the implementation of the Minsk agreements on Ukraine was "absolutely unfair," as Russia was not one of the sides to the conflict.

Over the past year, the West has introduced several rounds of economic sanctions against Russia over its alleged involvement in the Ukrainian crisis, even though Moscow has repeatedly denied the claims. In August 2014, Moscow banned the import of meat, fish, dairy, fruit and vegetables, and other food products from the countries that imposed restrictive measures on it.