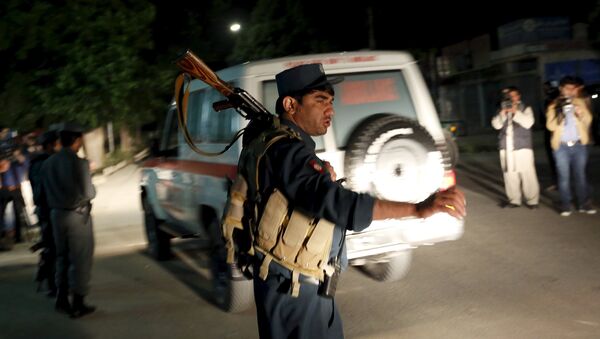 A US Citizen was killed during the attack on the hotel in Kabul, Afghanistan,on Wednesday, a State Department official told Sputnik.

WASHINGTON (Sputnik) — The official stressed that the US Embassy in Kabul is in close contact with the Afghan authorities and is working to obtain more information.

Earlier on Wednesday, gunmen stormed the guesthouse popular with foreigners in Kabul. According to the reports, some 20 people were trapped inside the hotel.

“We can confirm reports that a US citizen was killed in the attack on a guesthouse in Kabul, Afghanistan on May 13, 2014,” the official said on Wednesday.

Police rescued 54 people from the hotel following a siege by the Afghan security forces.

“We are also aware of unconfirmed reports that people were being held by unknown assailants,” the official noted.

The official added that they have seen reports of other countries’ citizens killed as well but cannot confirm them.

“Our thoughts are with the families of the victims at this time,” the official said.

01:05 am Kabul time. Every now and then a gunshot is still heard.

No group has immediately claimed responsibility for the attack. However, Taliban militants, who have declared a war on the Afghan government, have attacked guesthouses before.