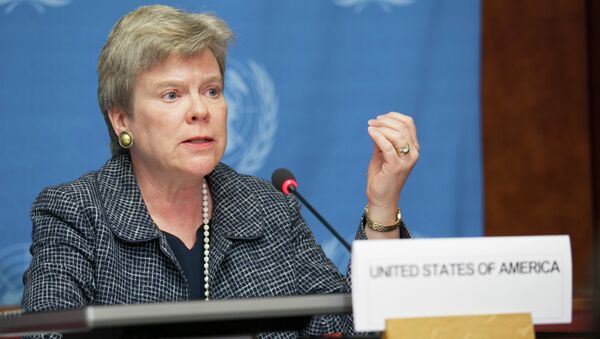 © Flickr / United States Mission Geneva
Subscribe
There is no reason to fear the use of nuclear weapons amid the current reset of US-Russia relations caused by the crisis in Ukraine, assured Rose Gottenmoeller, the Under Secretary of State for Arms Control and International Security for the US State Department.

The White House does not believe the Ukrainian conflict will lead to a nuclear war, said Rose Gottenmoeller, the Under Secretary of State for Arms Control and International Security for the US State Department.

"We don't think the Ukrainian conflict is a nuclear crisis," Gottenmoeller told Russian daily Kommersant in an interview.

She also added that Russia and the United States have a stable relationship when it comes to nuclear issues. Despite differences of opinion regarding the Ukrainian conflict, the two countries have no desire to use their nuclear arsenals to back up their arguments, Gottenmoeller said.

The pragmatic implementation of the Strategic Arms Reduction Treaty (START) continues. Over the last 50 years, the United States and Russia have taken numerous steps aimed at the reduction of nuclear weapons and building stable relationships in nuclear affairs, the high-ranking US official said.

US Media Fears Ukrainian Crisis May Lead to Nuclear War
Gottenmoeller's words come less than two weeks after Bryan Bender, a US journalist who specializes in security affairs, warned that Russia and the United States faced a serious risk of a nuclear exchange.

Certain individuals, such as Ukraine's Prime Minister Arseniy Yatsenyuk, keep spreading the fear of a nuclear crisis by building tension between the two super powers. Earlier on Wednesday while visiting France, Yatsenyuk said that Ukraine and Russia were on the verge of a nuclear war.

Speaking about how the Ukrainian crisis could trigger a nuclear confrontation between Russia and the United States, Gottenmoeller reiterated that it is not going to happen. There are now plenty of crises in the world that involve the use of conventional weapons, but a nuclear crisis is a completely different situation, Gottenmoeller assured, adding that the world is still very far from a nuclear crisis.