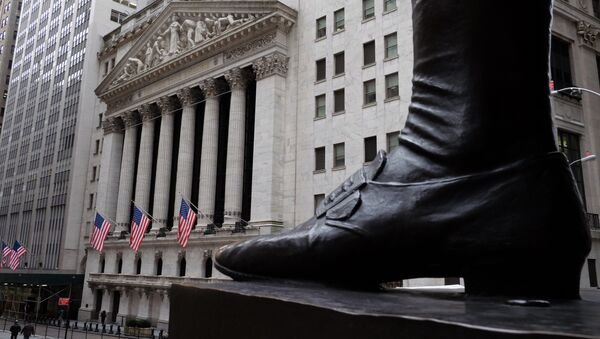 Kristian Rouz — Soft US labor market data for April, along with the ongoing bonds sell-off in the Eurozone have contributed to the decline of most stocks on Wall Street during Tuesday’s trading, while the downward pressure against the dollar prevailed albeit the overwhelming influx of investment in the US real estate market.

Markets Outside US Advance on European Bonds Sale, Strong French Data
The US Labor Department published its final readings of the hiring and firing data for March, to investors’ dissatisfaction with the overall US economy, as a sluggish expansion in the total amount of jobs coincided with a serious increase in employees quitting. As a result, the total amount of available vacancies even decreased since its 14-year highest this February.

According to the data, in March the overall number of open positions slid by 150,000, down to 4.99 mln from February’s record high of 5.14 mln. The number of people quitting their jobs in March was the highest since 2008, while weak expansion in the job market caused some concern.

US stocks declined for the second consecutive day amidst the soft labor data. The S&P 500 Index slid 0.1% at the close in New York, posting losses across its 5 out of 10 main sectors. Energy shares advanced though as oil prices increased amid the ever-declining activity (not the output though) in the North American oilfields. The Dow Jones Industrial shed 0.1% as well, while the Nasdaq Index lost 0.2%.

The main reason for the decline in the US stocks on Tuesday has been the sell-off in the Eurobonds that stopped only around midday on Wednesday after two days of investors taking profits out of the fixed income market. Governmental debt in Germany, Italy and Spain started losing its value early this week after yields had been climbing steadily since early May.

The US dollar was hit by the European bonds’ sell-off as the euro ended its rally. The common currency rose 1.9% during the past month, hitting European exporters. However, in 2015 the euro depreciated by 6% thus far.

The yen rose 0.2% to 119.87 against the dollar. The Bloomberg Dollar Spot Index (USD against its 10 major peers), slid by 0.5%, coinciding with the greenback’s rout against the euro, now trading at $1.1213. This April, the US currency posted its first month of losses in its valuation since last June, as the uneven pace of US economic expansion has put into question the timing of the US Fed’s interest rate hike.

Reports of IMF Turning Away From Greek Aid Questions Eurozone Credibility
The euro, however, is consensus-expected to decline against 13 out of 16 major currencies this year as the European Central Bank (ECB) has been aggressively stimulating the real economy by buying bonds and printing money, thus helping the German export-oriented manufacturers.

The US dollar, however, is poised to advance only in if the Fed takes further action to return its monetary policies to normality, which is less likely to happen by the end of the year.

“There are too many people who are in the stock market who should not be, and that is because of the Fed policies. At this point, we don’t think the Fed will raise interest rates this year, and all the talk of rate hikes is aimed at knocking the stock prices down,” Bruce Bittles of RW Baird & Co. said.