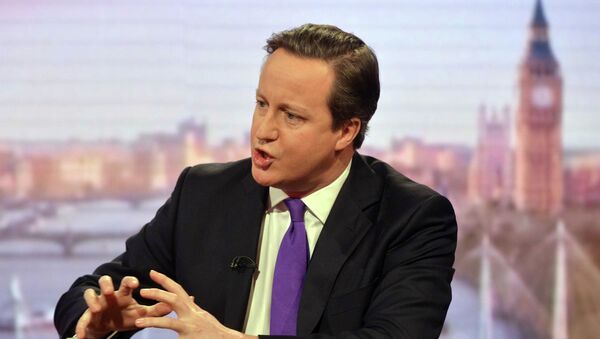 Telegraph Faces Investigation Over Emails Urging to Vote for Conservatives
MOSCOW (Sputnik) — The Conservatives beat Labour and other opposition parties at the May 7 election, securing a majority in the lower house of the UK Parliament.

"BBC executives and journalists have told me that there were regular, repeated threats from senior Tories during this election campaign about 'what would happen afterwards' if they did not do as they were told and fall into line," Baldwin wrote in an opinion piece published by the Guardian.

UK European Scrutiny Committee Criticizes BBC Coverage of EU Issues
Baldwin said that during the election campaign the BBC was "far from being in the pocket of Labour," adding that the corporation and his party in fact had a number of disputes – including over the BBC's excessive focus on the idea of Labour allegedly forming a coalition with the SNP.

Baldwin, who is also former deputy political editor of the Times, stressed that he himself was often "infuriated" by the BBC's election coverage.

He noted, however, that no government should "play political games" with media independence.

"The BBC is an organisation that is invested in fairness, seeking balance even when it is impossible to achieve, listening and speaking to everybody. All that is precious and fragile, especially now," Baldwin concluded.

After the Conservative win, Prime Minister David Cameron appointed one of the corporation's biggest critics, John Whittingdale, as Culture Secretary – a move some British media commentators see as "going to war" with the BBC. The Daily Mail said, citing Tory sources, that Whittingdale was determined to "sort out the BBC" and cut or even kill the broadcaster's license fee.

One Nation? Why the Divisive David Cameron is Not the Man to Save the UK
In the United Kingdom, any household watching or recording live television is required to hold a television license. Since April 2010, the annual license fee for colored TV stands at 145.5 pounds (about $230). This money is used mainly to fund the services of the British Broadcasting Corporation (BBC).

For years, the sum and the very existence of the license fee has caused debate. Some politicians have suggested that it be replaced by a subscription model or even be included in the household tax.

The BBC's Royal Charter, which sets out the BBC's funding for a ten-year period, is up for renewal in December 2016.