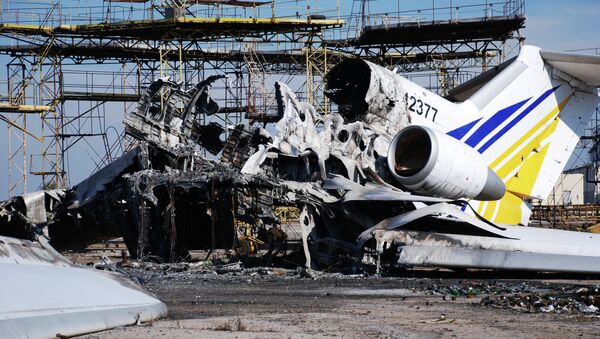 © Sputnik / Gennady Dubovoy
/
Go to the photo bank
Subscribe
The shelling of the Donetsk airport resumed on Tuesday evening, an unnamed source in the Joint Control and Command Center (JCCC) told RIA Novosti.

The situation was calm for three days before the fighting broke out in the area, according to the source.

"We documented more than 20 instances of ceasefire violations. We tried several times to urge the parties to stop shelling. We managed to do that by 10 p.m. (7 p.m. GMT)," the source continued.

The situation remained calm during the night and in the morning, although single shots could be heard in the area.

Kerry: Poroshenko Should 'Think Twice' Before Using Force in Donbass
The airport has been one of the hotspots of the Ukrainian standoff. On Monday, President Petro Poroshenko vowed to retake Donetsk Airport by whatever means necessary, although this would directly violate the Minsk deal.

Poroshenko is notorious for outlandish claims that have mass appeal, the latest being his May 12 claim to retake control of Donetsk airport.

Following talks with Russian President Vladimir Putin and Foreign Minister Sergei Lavrov in Sochi, US Secretary of State John Kerry urged Poroshenko "to think twice" before engaging in this kind of activity that would put the ceasefire in jeopardy.

In February, a ceasefire agreement, endorsed by Russia, Germany and France, was reached between the Donetsk and Lugansk People's Republics and Kiev, which launched a military operation against independence supporters in southeastern Ukraine in April 2014.

The ceasefire came into effect on February 15, but some violations have since been reported by both sides.