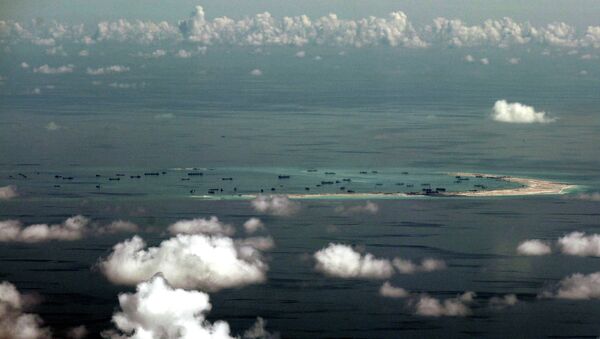 © AP Photo / Ritchie B. Tongo
Subscribe
Tensions in the South China Sea just became a lot more heated. According to a US official, the Pentagon is drafting plans to begin military patrols around China’s land reclamation projects in the Spratly Archipelago.

China has been constructing artificial islands atop coral reefs in the Spratly Archipelago for months now. The inclusion of runways and other potential military installations have caused a panic among Pentagon officials, who fear that Beijing may be making a power play for the strategic waterway.

In the now infamous example, the commander of the US Pacific Fleet even accused China of building a "great wall of sand."

China maintains that it has every right to build in its own territory, and that the islands will ultimately provide stations for disaster mitigation, scientific research, and navigation safety.

These assurances have done little to soothe Washington, and according to an anonymous Pentagon official speaking to the Wall Street Journal, the US may soon send military aircraft and naval vessels to enforce “freedom of navigation” around the disputed islands.

"We are considering how to demonstrate freedom of navigation in an area that is critical to world trade," the official said. "The US and its allies have a very different view than China over the rules of the road in the South China Sea."

Washington has steadily made moves to bolster its presence in the South China Sea. Admiral Harry Harris Jr. of the US Pacific Fleet announced in March that the US Navy would be shifting 60% of its fleet into the Pacific by 2020, and would expand its cooperation with India.

The US Navy has also admitted to flying its most advanced spy plane – the P-8A Poseidon – out of the Philippines earlier this year. Capable of both anti-submarine and anti-surface warfare, the plane has been regularly monitoring the South China Sea region.

In March, the United States Senate also requested that the US adopt a formal strategy for dealing with Beijing’s growing influence in the region. It’s possible that the Pentagon’s considerations are a response to this appeal.

Also throwing itself into the mix is Japan, another country with no territorial claim in the region. The Japanese Navy has been conducting military exercises with Philippines, and Tokyo has indicated that it may partake in joint air patrols with the United States.

There’s a lot at stake. While China claims nearly 90 percent of the South China Sea, there are disputed, overlapping claims by Vietnam, Taiwan, the Philippines, Brunei, and Malaysia. All of them also claim various parts of the Spratly Archipelago.

Nearly $5 trillion in trade passes through the contested waterway each year.