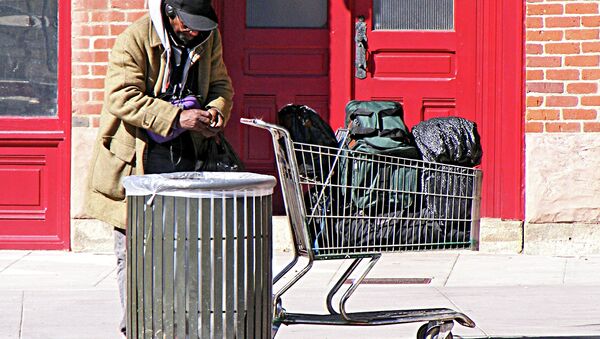 © Flickr / St Stev
Subscribe
The homeless population of Los Angeles County - already the second largest in the nation - grew by 12% over the last two years, amid hard times for low-wage workers and a sluggish economic recovery.

The homeless population of the nation's second largest metropolitan area rose to 44,300 people, about a 5,000 person increase from 2013, according to a report released Monday by the Los Angeles Homeless Services Authority (LAHSA). This includes people living on the streets, in cars, in abandoned buildings or in shelters and temporary or "transitional" housing.

US 'Fortune 500' Companies Unwilling to Invest in American Society - Obama

The city of Los Angeles proper — which claims one of the highest concentrations of homeless people in the nation — accounted for a third of the total. The number of homeless families with children rose by the same proportion as the general population — 12%.

California was particularly hard hit by the 2008 financial crisis and LAHSA cites three factors combining to push more and more Angelenos onto the streets: unemployment, stagnant wages, and an increasingly tight market for affordable housing.

The jobless rate for the county has continued, throughout the recovery, to be high at 7.5%, compared to the 5.6% national average.  And the lowest-earning workers have seen their wages stagnate or in some instances even drop. 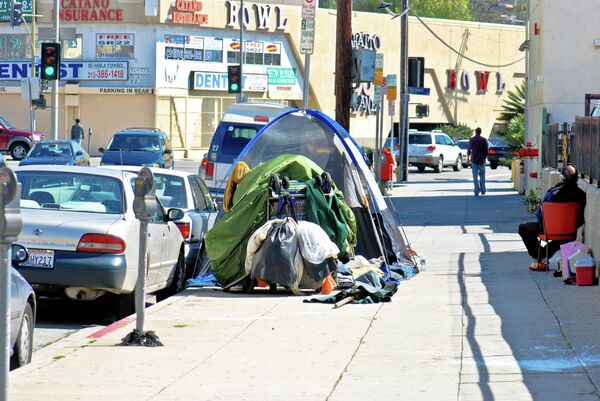 The survey of Los Angeles County's homeless population - which has seen a surge in encampments like the one pictured above - takes place every two years. In January, over three days, 5,500 volunteers participated in the survey from which a final number is extrapolated.
© Flickr / Robin Kanouse

A recent statewide study found that in Southern California, the rising cost of housing has been a major factor in the new homeless population growth. Of the state's 1.5 million low income households that had no access to affordable housing, half were in the greater Los Angeles and Inland Empire area east of LA.

"The economy has improved, but not for the persons at greatest risk of homelessness," said LAHSA executive director Peter Lynn.

The population of homeless veterans in Los Angeles is the nation's largest, but it has not increased in the latest measurements, and seems to have levelled out at about 4,000.

However, Los Angeles has already housed 7,500 veterans since 2013, according to Lynn, indicating that many new veterans are still being pushed into homelessness. Los Angeles Mayor Eric Garcetti has vowed to find housing for every homeless veteran in the city by the end of the year.

But, perhaps most strikingly, the population specifically living in tents, vehicles or other improvised encampments is up 85% over the previous tally, coming to 9,535 total.

"It's everywhere now; the encampments are in residential neighborhoods, they're outside of schools," LA City Councilman Mike Bonin told the Los Angeles Times, adding that "It shows we've got a hell of a lot of work ahead."

Nearly a Hundred Million Americans Out of Work - Report

The elimination of many cheap motels due to gentrification in the Venice area was a factor in pushing more people into encampments, the Times reported.

"The city and county have done such a terribly poor job of creating affordable housing, basically they've ignored the issue," Steve Clare, executive director of the Venice Community Housing, told the Times.

"All we get from City Hall is breezy poetry — 'I will house everybody by next year.' That's absurd. There's no housing to put people in," said long-time homeless advocate Alice Callaghan. "It's very depressing. I don't think people understand how bad it is."