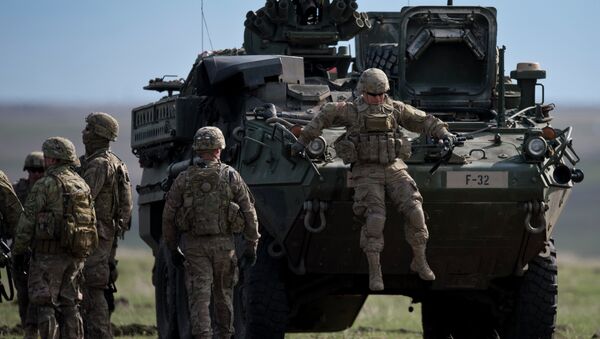 © AFP 2022 / DANIEL MIHAILESCU
Subscribe
More than 350 American soldiers and 80 US Army vehicles will begin a 400 kilometer "cavalry march" across Romania, with cover from US Air Force, on their way to multinational exercises, the Pentagon announced on Tuesday.

"This cav march represents the joint-Romanian effort to honor the past and build the future and demonstrate NATO interoperability," said Pentagon spokesman Colonel Steve Warren.

Troops with the 2nd Squadron, 2nd Cavalry Regiment, will march from Mikhail Kogalniceanu Air Base to the Romanian Land Forces Combat Training Center in Cincu, where they will meet their Canadian, British, and Romanian counterparts. The exercise will take place between May 15 and June 6.

"The purpose of this mission is simply reassurance to our NATO allies, especially Romania," the 2nd Squadron’s commander, Lieutenant Colonel Theodore Johnson, said in a news release. "This will also be a combined effort to show interoperability and we will defer to the Romanian armed forces on all coordination and emerging issues."

The exercise will also feature A-10 Thunderbolt II's from the 354th Expeditionary Fighter Squadron, which will demonstrate close-air-support by conducting multiple close passes above the convoy.

Most of the vehicles involved in the march are Strykers, eight-wheeled armored combat vehicles that are similar to tanks, but more mobile.

The event, while focused on the force’s ability to mobilize, will also include stops in local townships, allowing for the soldiers to interact with the public, including a basketball game between US soldiers and a local high school team.

"This event will demonstrate our strong relationship with Romania and our ability to move freely along interior lines across the NATO alliance," Johnson said.

Last month, the US Army sent the 3rd Squadron, 2nd Cavalry Regiment and their Strykers on a 1,900-kilometer "Dragoon Ride" through six countries and back to its home station in Vilseck, Germany.