Is Finland on Course to Recognize Donetsk People's Republic? 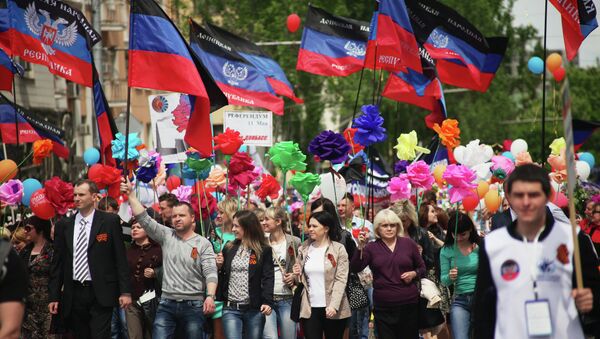 It has de facto already happened, Johan Bäckman, a Finnish political activist, author and legal sociologist, is convinced, if not for the country than at least for one of the governing parties.

Donetsk, Lugansk Republics Mark First Year Anniversary
Bäckman said that supporters of the ruling party in Finland volunteer at the mission of the Donetsk People's Republic (DPR) which volunteers established in Helsinki a year ago, as reported by the Rossiyskaya Gazeta newspaper.

"The fact that supporters of the ruling party [in Finland] have started to work in the best interests of the DPR is a significant development," Bäckman said, referring to the Social Democratic Party of Finland, as quoted by the media outlet.

According to Bäckman, "This means that de facto a government party of an EU member state has recognized the DPR."

The political activist added that the DPR mission in Helsinki tries to counter massive propaganda in the Western media targeted against the Donetsk and Lugansk People's Republics. These are the two regions in eastern Ukraine that refused to accept the Kiev authorities that came to power following a coup in February 2014.

"We sent journalists to Donbass to objectively report for the Western media outlets. We sent a Finnish filmmaker to shoot a documentary on foreign volunteers," the Russian newspaper quoted Bäckman as saying at the "Donbass: Yesterday, Today and Tomorrow" international forum.

"A book titled 'Donbass will rise from ruins' will be released in the near future. Penned by popular Finnish author Matti Rossi, it tells the story of the DPR establishment and the republic's fight for freedom," the political activist added.