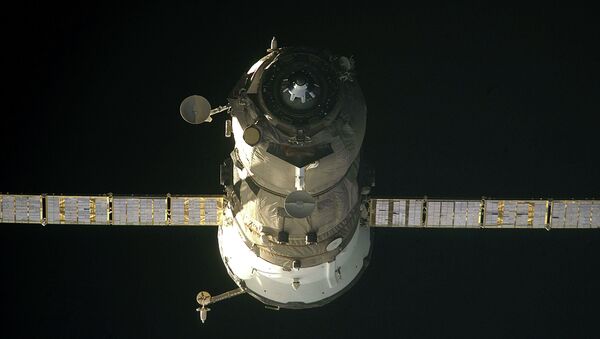 © AFP 2021 / NASA
Subscribe
An improper separation of the Progress M-27M space freighter from a carrier rocket following leaks in fuel tanks on the booster caused the failure of the Progress cargo mission to the International Space Station (ISS) in April, Russia's space agency Roscosmos said Tuesday.

Mission Over: Progress Cargo Vessel Begins Spinning Out of Orbit
MOSCOW (Sputnik) — The Progress M-27M spacecraft was launched aboard a Soyuz carrier rocket from the Baikonur space center in Kazakhstan on April 28. The cargo vessel was carrying fuel, oxygen, food and scientific equipment for the ISS crew.

The spacecraft burned in the Earth's atmosphere over the Pacific Ocean early on Friday.

"An improper separation from the third stage of the carrier rocket has occurred. As a result, the spacecraft has been brought to an orbit some 40 kilometers [25 miles] higher than scheduled," head of Roscosmos, Igor Komarov, said at a news conference in Moscow.

Russian Telescope Captures Burning Up Progress Spacecraft
According to Komarov, the telemetry data analyzed during the preliminary investigation has confirmed consecutive leaks in the oxidant tank and the fuel tank of the third stage followed by emergency separation.

A Roscosmos group of experts is expected to complete the investigation and announce the final results by May 22, Komarov said.

Roscosmos called on the Russian Defense Ministry to postpone an upcoming launch of a military satellite atop a Soyuz rocket until the cause of the recent Progress spacecraft loss is known.

“We recommended that preparations for the satellite launch are halted until a commission [to investigate the Progress failure] completes its work,” Roscosmos deputy chief Alexander Ivanov said.

The crew of the International Space Station will have to spend an extra month in the orbit as their return was delayed by the loss of the Progress M-27M spacecraft, a senior official with Russia’s Energiya space corporation said.

Progress Spacecraft Makes Final Fall Over Pacific Ocean
“We were to land the Soyuz spacecraft the day after tomorrow. We came to a conclusion that it would be unfeasible,” Energiya deputy chief Vladimir Solovyev said.

“We have already talked to them [the ISS crew] and they agreed… to work in the orbit for an extra month,” he went on.

The new ISS expedition, to be launched on May 26, was postponed until late July.

However, the manned mission to the International Space Station, scheduled for September, is unlikely to be postponed after the loss of the Progress spacecraft.