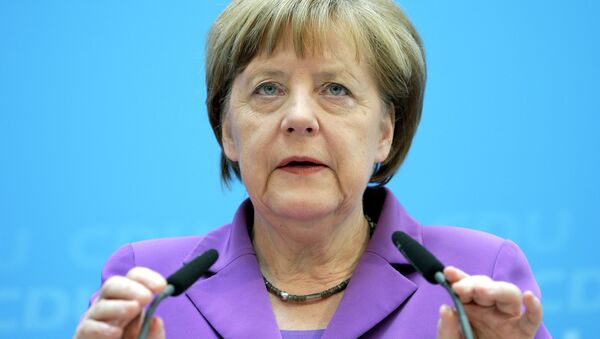 German Chancellor Angela Merkel has come out in defense of her staff, denying media reports that her administration lied about plans to reach a "no-spying" agreement with the United States.

Shortly before Germany's 2013 elections, Ronald Pofalla, Merkel's chief of staff at the time, publicly stated that the two governments were going to work together to end the spying practices that Edward Snowden had revealed in June of that year, outraging the German public.

But, according to local media reports published Saturday that cite email exchanges among officials, there was no solid plan for such a negotiation. Critics now allege that the statements were fabricated to curry favor during election season while the public was still reeling from the discovery that the US National Security Agency (NSA) had, among other things, been gathering information from Merkel's mobile phone.

Merkel defended her staff against these accusations of dishonesty Monday.

"I can say here publicly that everybody worked to the best of their knowledge," she said of the conduct of Pofalla, his successor and current chief of staff Peter Altmaier, and his predecessor Thomas de Maiziere.

This latest report of government dishonesty regarding the spying scandal comes on the heels of reports that the German government actually knew of and collaborated with NSA spying operations in Germany as far back as 2008.

German media reported in April that the German intelligence service, the Bundesnachrichtendienst (BND), had been spying on targets within Germany, upon request of the NSA. Under a 2002 information-sharing agreement, the BND was given a list of surveillance targets by their American counterparts that included thousands of names, email addresses and IP addresses of companies, politicians and regional entities among their European allies.

Some German lawmakers have been given information about the list, and Merkel says parliament will be given all the information it needs to investigate the matter, but the exact targets it included have not been made public.

De Maziere, as chief of staff from 2005-2009 was in charge of the BND, and was reportedly informed of the NSA collaboration in 2008. He has denied the charges and says that he is "ready to exhaustively inform authorized parliament’s bodies on what I know and remember."

One of the companies that was reportedly spied on, Airbus, has said it will file suit over the government's snooping. “There is a concrete suspicion of industrial espionage,” the company said in a statement.

Though Merkel admitted that mistakes may have been made, she insisted that the rule of law is her priority. At least so far, the allegations do not seem to have damaged her party — the Social Democrats' — popularity, though her personal approval rating has taken a hit.

"For me, it is a matter of course that intelligence agencies must keep to German laws when they are active in Germany," Merkel said.

"Enforcing that may perhaps be difficult, may take longer than we want, but it remains a political aim for me."