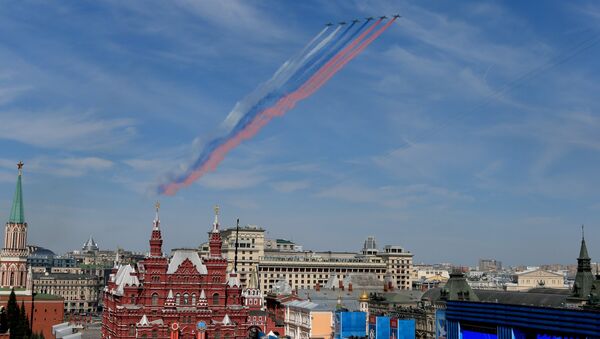 Nowadays it is important to remember the 1945 Victory Day because Nazism still lives in various forms even 70 years after World War II, an Italian journalist claims.

Putin: Wherever People Celebrate V-Day, Being Sincere Is Most Important
On May 9 Russia commemorated its victory over Nazism andit is no surprise that many European leaders did not accept invitations to attend the Victory Parade in Moscow, a journalist of Italian website Formiche wrote.

It is evident again that history goes in circles and Moscow is "the unique force in struggle against Western financial and military hegemony." Russia has become "the leading European regional power," the journalist claimed.

"The Ukrainian crisis is just the epicenter of this struggle," he added.

"Neo-Nazi gangs seeded fear among Russian-speaking people in Donbass as it happened in 1941 since the beginning of Operation Barbarossa. But today just like at that time resistance is growing strong and brave," the article read.

The journalist said that defense Leningrad and Stalingrad is repeating today in the form of anti-Russian sanctions approved by the European Union and "the attack against the ruble."

"Now more than ever it is important to remember the Victory Day because Nazism comes in various forms. <…> History will repeat, and those who will try to defeat Russia will understand that history goes in circles," the journalist concluded.