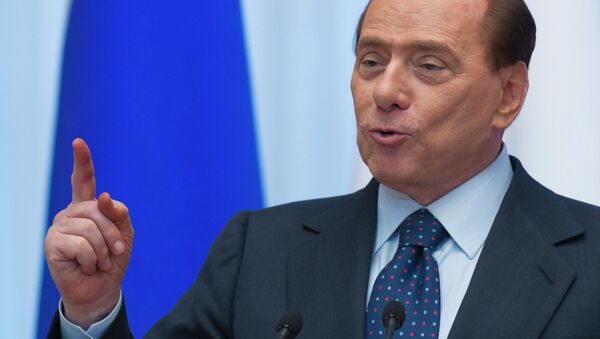 © Sputnik / Sergey Guneev
/
Go to the photo bank
Subscribe
Former Italian Prime Minister Silvio Berlusconi said Saturday that the Western leaders were "short-sighted" in committing the "error" of not coming to Moscow for Victory Day celebrations.

"The choice not to be present in Moscow is first of all lack of respect to Russia's decisive contribution to the victory against Hitler in 1945," Berlusconi wrote in an open letter to the Corriere della Sera daily.

He added that attempts to isolate Russia over its alleged role in the ongoing Ukraine crisis were harmful for the Western countries.

"In the current geopolitical situation the West has faced two challenges, the emerging Asian economic powers and the political and military Islamic fundamentalism. To withstand these challenges, it is crucial to have Russia on our side," Berlusconi said.

The former Italian leader also said that Italian and European companies have paid a high price following the West's anti-Russia sanctions, which failed to yield "any concrete results."

The United States, the European Union and a number of their allies imposed several rounds of restrictive measures on the Russian economy after the Black Sea peninsula of Crimea rejoined Russia following a referendum in March 2014.

Earlier this week, current Italian Prime Minister Matteo Renzi became the first major European leader to visit Moscow for talks with Russian President Vladimir Putin since what the West said was the "annexation" of Crimea.